A House Of Prayer (AHOP)

What Sacrifice Yields (in Camasca) June 2016.

The Other Side of the Mountain  (Jan and Larry Tepe, DDS) January 2019.

Who Heals Who (Five weeks in Camasca, Intibuca) July – August 2017.

In their Own Words (Scholarship Program), September 2019

The Robots and Kids are INSIDE!!   (Catholic Relief Services and Donors help us build a meeting space) March 2019.

Haley’s Reflection on Volunteering (Haley Rapp Chipol reflects on volunteering with StS) August 2019.
Robots and Transcendence. (Initiation of FIRST Global Robotics Honduran Team) January 2017.
Cultural Exchanges, (Waite Family in Camasca) June 2016.
February not quite like you remembered it, (Brigades of February) February 2016.
Vacationing, But Not So Far Away, (at San Jose and Roatan) October 2015.
Rock, Paper, Scissors, September 2015.
Message from CEO Wayne and Christina Waite, July 2015.
Recording Hope (Videotaping) July 2015.
Culture and Convenion (Expanded Health Care) May 2015.
It Was the Best of Times ….  (Hombro a Hombro Board of Directors Meeting)  April 2015.
Secret Mission  (Wayne Waite visiting the Frontera)  April 2015.
25 Years – The Dignity of Working Shoulder to Shoulder  January 2015.

University at Buffalo, School of Medicine / School of Pharmacy and Pharmaceutical Sciences

University of Minnesota, School of Nursing

Evaluation Report – Assessing the use of Technology and Khan Academy to improve educational outcomes in Sacatepequez, Guatemala, prepared for FUNSEPA by Manaus Consulting, 27 May 2016.

How The Most Dangerous Place On Earth Got Safer. Sonia Nazario, New York Times, Opinion, August 11, 2016.

How to end a neocolonialist approach to global health training By Michelle Morse, November 10, 2014, Published by Devex

“Rapid Assessment of Access to Primary Care in Remote Parts of the Developing World,” published in Field Methods by Temple University (08/2008)

Jessica Weeks MD and Heang Lim MD volunteer for the poor in Honduras after medical school:

Read our brochure on Shoulder to Shoulder and contact us. 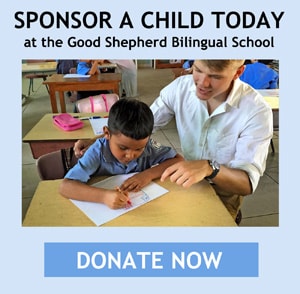