Not in Wisconsin Anymore… 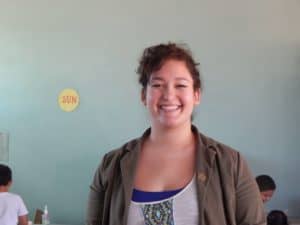 February 2, 2015
My bias toward Wisconsonian culture is primarily based on the limiting view of crazed Green Bay Packers fans wearing cheese wedge slices as hats.  Additionally, as a haughty, New England, right coaster, I lump Wisconsin, Michigan, and Minnesota together.  It’s really, really, really cold there, two or three days of summer in August at the most, and anyone purposely living under those conditions is very suspect.  There aren’t any cities, everyone is a rural farmer, and the Lutheran Church forms everybody’s moral conscience.  I blame the latter on NPR and Garrison Keillor.  My bias of Wisconsin provincialism and narrow-mindedness was well-formed until just recently.
In January, Marcia LaSalle, a Milwaukee, Wisconsin native, arrived in Camasca, Intibucá, Honduras to begin four months of volunteer service at the Good Shepherd Bilingual School.  Though her surname is French, her father is Puerto Rican.  Her home life implied cultural diversity even as her mother, by Marcia’s own description, might have stepped right out of a Leave It To Beaver episode.  Marcia visited Puerto Rico and her grandparents in Aguadilla, PR as a child and is close to many family members on her father’s side.  Thus, she was acquainted with Spanish, but her father chose not to speak Spanish in the home.   Marcia is very proud of her Latina heritage and wished she had learned more Spanish as a child.  As a 21 year old adult, she is now becoming fluent in Spanish, having lived and traveled in Spain and now in Honduras.  Not at all fearful or timid, seeking to expand her experiential horizon, she studied in England.  The Wisconsin world traveler decided to spend the next four months in Honduras after completing the majority of her course requirements at St. Norbert’s College a semester early.  When she returns in May she will have her BA in Anthropology.
Apart from that liberal, cosmopolitan, adventure-seeking, Wisconsin spirit, what brought Marcia to Honduras?  A childhood friend spent some time here in Honduras with Shoulder to Shoulder.  Whereas that had to have been influential, it’s perhaps best understood as presenting her the door to opportunity.  Choosing to open that door was not in order to follow her friend, but to sate her own spiritual quest.  Marcia witnesses an inner drive to meet and know others outside her own comfort zone.  It is no surprise that she majored in anthropology.  She admits to a fascination with culture.  How is it that we can be so different, and yet so the same, and why?  Most of us are content to be with others who act, think, and feel in similar ways.  There’s a safety in sameness.  But Marcia discovered that the best way to be pulled and challenged, to be self-reflective and to grow, is to feel just a little insecure around persons unlike oneself. 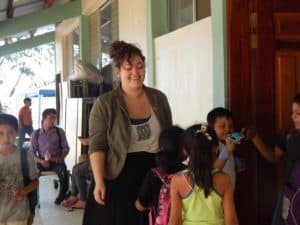 Marcia is at our bilingual school.  Though she makes no claims on either being, or wanting to be, a teacher, she is present and sharing with the children.  She’s teaching them English as they are helping her to hone her Spanish.  They are communicating.  More importantly, they are reaching out across culture, respecting that which is different and celebrating that which is the same.  As a true anthropologist, Marcia is learning and teaching what is most important, even beautiful, about being human.  Thanks Marcia.  I will never again think of a Wisconsin with such limiting, narrow bias.

Perhaps you, even as you’re reading this, feel a certain tug to place yourself outside of your comfort zone.  Maybe you would like to live in a developing country, serve and be served by the persons you would meet.  Perhaps you have a little knowledge of Spanish, or a lot, or you just want the challenge of it all.  If this describes you, maybe you should consider volunteering.  Give it some serious thought.  You can start by looking at the possibilities with Shoulder to Shoulder at https://www.shouldertoshoulder.org/volunteer-opportunities.