Pickups and Bubbles: An Elusive Measure

Let’s see.  Twenty-three participants, eleven translators (four were leaving on that day, so there were four extra in the morning), two brigade coordinators, and two drivers, I think that is thirty eight.  Okay so maybe it was thirty-seven or thirty nine, I didn’t actually count.  The Virginia Commonwealth University / Fairfax Family Practice Center Brigade at Pinares, San Marcos de la Sierra, set out that Tuesday morning for two smaller communities: Cedros and Las Marias.  So everyone packed into two pickup trucks.  For the sake of argument, let’s just say nineteen in each pickup.  Okay, so each pickup did have an extended cab.  They probably squished seven into each cab.  That meant that each pickup bed held about twelve persons, plus medications, supplies, and everybody’s lunch. 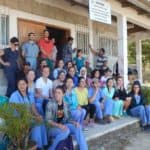 We followed behind them in our comfortable Toyota Land Cruiser.  Comfortable perhaps, only by comparison, because we were six persons and a ton of gear.  Shoulder to Shoulder had contracted with Aeden O’Connor, a twenty year old cinematography student from Tegucigalpa studying in Prague, to produce some video documentaries on our mission.  They were a crew of four with Laura and I along as guides.  We watched the pickups travel slowly in front of us, a partially comical, partially surreal scene.  They traveled slowly, for safety as much as necessity, and we wondered about the incredible strain on those vehicles so weighted down.  We traveled about two miles north, back toward La Esperanza, on the half gravel, half paved “highway,” before taking a left on the access road toward the two smaller communities.  The one lane rock and gravel path twisted, rose, and fell along mountainous terrain.  The road, literally carved out of the mountain ledge, meant a wall of rock to the right, and, to the left, the sheer two, three, or four hundred foot drop to the base of the mountain.  We actually never got that far away from the main highway, it always remaining in sight less than a mile to the east.  But, the rugged terrain and weighted vehicles could all but inch and crawl toward our destination.  One truck continued straight on as we followed the other to the left and the community of Cedros.  But we never really saw any community per se, a single house here and there along the road.  Most of the inhabitants don’t live along the road, nor do they live in any community.  Their houses are scattered and hidden under the pines, no electric lines running overhead, accessible by foot paths descending and ascending from the road.  The entirety of the drive is a short distance, no more than four miles, but it takes about thirty minutes.  We arrive at the end of the road at a school, sitting above a huge soccer field. 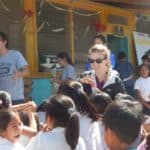 Down to the left of the school is a small church, and just beyond the soccer field, accessible by a footpath, a house.  But there is nothing else here.  We’re in the middle of a forest.  Still, the children are  waiting for us, forty or fifty of them.  Where did they come from and how did they get here?  VCU / FFPC is here for the CHI (Children’s Health Initiative) program.  They will take heights and weights, check blood for anemia, check their eyesight, apply varnish to their teeth, and give a few other tests.  They set up something of an assembly line to do this efficiently.  But the kids are already involving themselves with the fair-skinned, English-speaking guests.  Some are playing soccer and others are circling about Aeden, his film crew, and the camera.  Two young women from the brigade take out bubble bottles and start blowing bubbles into the air.  The kids gather around them, clapping at them and jumping up to try to catch them in their hands.  A few of them attempt to blow the bubbles themselves, but they haven’t mastered the art.  Most of them have probably never seen soap bubbles.  Unless they were fortunate enough to go to a town fiesta in San Marcos, there would be no opportunity to buy them.  Even so, very few of their families could afford such a luxury item.  The kids are bright-eyed, joyous.  Their laughter and their smiles, so inviting and uninhibited, transform this humble school yard into a magical fantasy world.  The adults are smiling too, unconsciously, almost as if they are dreaming.  I am happy to think that Aeden is getting it all on video.
Some will cynically question the worth of a brigade.  Twenty three Americans from the medical and academic world, many of whom don’t speak any Spanish, all coming from a world far removed from the realities of Cedros, visit for two weeks.  Will they have any lasting effect?  Will they have any real impact on the enduring poverty?  I suppose if the assessment of the value of such a trip is only to be judged by empirical metrics, the cynics will be justified.  But bubbles, laughter, and smiles defy empirical measurement.  The good that is achieved, both for the Hondurans as well as the brigade participants, is not a value of the head, but one of the heart. 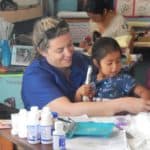 The small encounters will be remembered.  Enrichment, empowerment, development, and meaningful growth are not so much a measure of what is given or taken, but rather found in the elusiveness of what is shared.  VCU / FFPC came with two physical therapy doctoral students.  Though I may be mistaken, and my apologies if I am, I cannot recall physical therapy being part of any other brigade.  With the severity of muscular-skeletal, chronic conditions resulting from accidents and the abiding conditions of exhaustive, physical labor, how important is this discipline here in the Frontera.  The two therapists saw an incredible amount of patients and offered them solutions and relief that they would not otherwise have discovered.  Both of them related the story of one man.  As they told the story, their faces beamed as they choked back tears.  The man had suffered a stroke and was partially paralyzed.  He walked only with great difficulty and effort.  They created for him a sling to secure under his foot.  With his arms he could hoist his lifeless leg and swing it forward.  They practiced with him and soon the man had mastered the maneuver.  His life had completely changed by this simple gift of their knowledge.  He would no longer be confined and dependent.  He would no longer feel himself a burden to his friends and family.  He could walk under his own power.  What a gift! 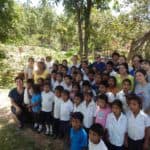 So light these bubbles in the air that drift above and beyond us, so seemingly insignificant.  Yet it is this lightness that holds a world of magic, the wonder and mystery of all that is discovered in sharing.