For the last year, Kathryn Taylor (Ohio State B.S. ’12; Harvard M.D. ’17) has been training Shoulder to Shoulder’s physicians, nurses, and local midwives how to save babies’ lives. Based at our Santa Lucia clinic, Kathryn has trained and evaluated our staff for basic neonatal resuscitation techniques as part of a study of Helping Babies Breathe, a joint program of the WHO, Save the Children, and the American Academy of Pediatrics. She teaches a curriculum designed for developing countries in limited resource environments.
Approximately 23% of neonatal deaths worldwide are due to asphyxiation. Helping Babies Breathe was developed on the premise that all babies deserve simple neonatal care, regardless of resources. It focuses on improving outcomes in the neonatal period and reducing birth asphyxia. Each year, an estimated 10 million babies require breathing assistance. However, only one to two percent of babies require advanced care. In hospital-based settings in the rural departments of Honduras, including Intibucá, the neonatal death rate is 46.9 deaths per 1000 live births. In the United States, there are four deaths per 1000 live births.
The course is taught at a fifth grade reading level, and focuses more on facilitation than traditional education – utilizing interaction and practice in pairs. Training partners learn to have a plan and materials in place at the time of delivery, to recognize whether a baby is breathing, and operating under time and pressure constraints in order to have a baby breathing in under a minute.
Kathryn has attended and filmed 78 births at the Santa Lucia clinic. She meets with the labor and delivery team following each birth and leads a debriefing. They review the video and find ways to improve.  Kathryn will be spending her final month implementing the program at the main regional hospital in La Esperanza prior to beginning medical school in the fall. Srirama Josyula (Ohio State B.S. ’13; Ohio State M.D. ’18) will continue with the program in Santa Lucia and La Esperanza. 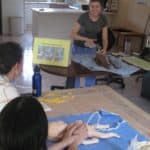 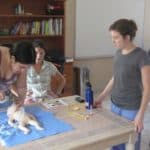