You might think robots are a fairly new invention. Oddly, on January 25 of this year, they celebrate 96 years of imaginative and real existence when they first debuted on a Prague stage in Karel Capek’s controversial Sci-Fi play R. U. R. (Rossumovi Univerzáini Roboti – Rossumov’s Universal Robots). Robots seem to fascinate human thought, ambition, and dreams. If you’re close to my age, your first memory of robots may be of one simply named “Robot” who flung his arms up and down, teetering in exaggerated panic, and yelling out, “Danger, Will Robinson, Danger!” Beyond that, my Sci-Fi cultural formation has been underpinned by a series of robots:  Rosie from the Jetsons, Rock-Em-Sock-Em robots, HAL, Optimus Prime, the adorable R2D2 and C-3PO, and WALL-E. Our fascination with robots may have something to do with their being created in our own image and designed to overcome the challenges of our finite nature. Though they often symbolize the tragic consequence of striving to be godlike as in the dark theme of Capek’s play, they also relate our sense of inner beauty and purpose. Somehow robots give expression to our capacity and drive to transcend the limitations of mortal existence. The Terminator, later Governator, says it best in his signature Austrian cyborg accent, “I’ll be back.”

Performance of Capek’s RUR in Prague

Robots arrived on the Frontera of Intibucá last week. They came with a rather eclectic ambassadorial Shoulder to Shoulder team. Our board president, Wayne Waite, organized the trip of six individuals who had no knowledge of one another prior to the trip. They came with diverse purpose and hope. Paul and Sandy, a couple on the heels of retirement, came to explore and discern a possible long-term commitment to living in Honduras and volunteering with Shoulder to Shoulder’s ever evolving education mission. Ian, a fourth year business major at the University of Dayton, also came to discern long-term volunteering. Haley, a registered nurse from Oklahoma, came to begin her service with Shoulder to Shoulder working with brigades and the bilingual school.  Tim Gunderman, a Knight of Malta USA, a seasoned gentleman whose heart is attached to service to the poor, came to see our nutritional supplement program in action in the hope of raising funds for its continuation and expansion. Not knowing one another and not sharing in any obvious purpose, how could this group come together with a unified vision? And what in the world does it have to do with robots? 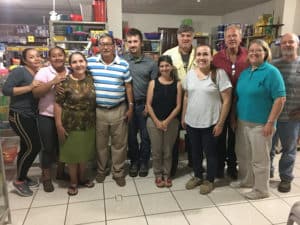 In 1989 Dean Kamen established FIRST (For Inspiration and Recognition of Science and Technology) to excite the youth of America in the value of investing in STEM (Science, Technology, Engineering, and Mathematics) education. FIRST sponsors robotic competitions among youth of various ages. Now, FIRST is hoping to move its success among US youth to an international level, sponsoring the first annual “International Robot Olympics,” 16-18 July 2017 in Washington DC. The president, Joe Sestak, of this new non-profit, the International FIRST Committee (IFC), spoke with our president Wayne about putting together a Honduran team for the competition called FIRST Global. Wayne, the undiscerning, don’t-let-reality-threaten-your-dreams, ever the optimist, immediately replied, “Sure, no problem.” Obviously, there have been problems.

This team that came with Wayne on his quixotic mission had not even known about robots until days or even hours before the trip. A snow storm cancelled flights out of Dayton, moving the trip back a day, and the diverse group of travelers came to know one another while running frantically through unfamiliar airport terminals and hotel lobbies (Danger, Will Robinson. Danger!). Joe Sestak and IFC intended to send a professional videographer on the trip to record the coming together of the team, but that individual could not get a Visa into Honduras because she was traveling from Peru where there is a threat of yellow fever. That obstacle was overcome by renting video equipment in Tegucigalpa and promoting Ian to the role of film crew. Originally, we planned to form a team with two representatives from Camasca on the Frontera with a larger group from the American School in Tegucigalpa. The American School is a distinguished, private school that has a lot of experience with technology and robotics competition. Though they have committed themselves to our support in technical training, they declined our invitation to be part of the competition itself due to scheduling conflicts. Now we had to form a team of high school students exclusively from the Frontera. This was the largest challenge. 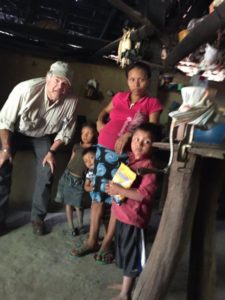 Tim Gunderman with a Family enrolled in the nutrition program

Mr. Tim Gunderman has never been to the Frontera, though he’s familiar with Honduras. Driving along the washed out roads with our four-wheel vehicle, taking forty-five minutes to traverse a six mile distance while avoiding the cliffs, he turned to me and expressed his amazement. “Here?!, in this totally isolated, resourced challenged area where water runs only every other day for an hour and sometimes doesn’t run at all. Here?!, where the electricity, when it is not off, isn’t powerful enough to run a microwave. Here?!, where families of ten live on the sides of mountain cliffs in one room huts. Here?!, where the woman in the same house of ten boils hand-made soap on a stove inside the house without a chimney to exhaust the fumes. Here?!, where children are malnourished and at risk for chronic disease and death  and we are not sure if we can find funding to continue their nutritional supplement. Here?!, this is where Shoulder to Shoulder is bringing first-class, computer technology, internet capacity, and robots in order to revolutionize a system of education and create development?” I thought briefly about his question, and then simply answered, “Yes.”

While Mr. Gunderman witnessed our nutrition program and the distribution of the supplement Chispuditos in the small towns of the Frontera with me and Wayne and filmed by Ian, Sandy and Paul with Laura worked on initiating the robot project. Sandy, a retired teacher, has worked with robotics competitions and the LEGO product Mindstorm. In fact she was able to bring the product with her and the teenagers will be working with it over the next months. Fourteen young people from Concepción and Camasca have been enrolled in the program and will work two hours daily on the project under the supervision of local instructors. Dionisio, 14, lives with his family in the small village of San Ignacio. He walks forty-five minutes to and from the high school every day over a mountain. He’s never been outside of Camasca. His father works the land for a living and is a leader in his church community. His mother takes care of her home and makes and sells pottery to augment their meager income. But Dionisio is on the team, he will commit himself to it with great passion, and hopes to be chosen to go to Washington, DC in July.

Robot at the bilingual school

Why was I, and perhaps you as well, so fascinated with robots as a young boy. Why did Karel Capek write a play about them decades before they became reality? Could it simply be the unbounded nature of our imagination? Is the human person enslaved by limitations and mortality? Are we to be forever chained to the scorn and indignity of poverty? Can we move beyond it? I think perhaps robots are the expressions of the best we want to be. Moving beyond the possible, overcoming the obstacles in the way, is the only thing that has ever truly revealed the human soul. We are the designers of our destinies.