Rock, Paper, Scissors. You might remember this game, also called Roshambo, from your childhood, or perhaps you still play it to decide who gets to take out the garbage. Depending on the throw of your hand to symbolize one of the three elements, it clearly decides a victor and a loser. Rock crushes scissors. Scissors cut paper. Paper covers rock. Though the latter seems a bit dubious and forced. I would think that rock would always win, but then the game wouldn’t make much sense. In any case, the game supports the idea that life is about competition. There are always winners and losers. I guess it takes wisdom to realize that sometimes collaboration is the best game plan.

A few weeks back, some of the board members were here in Honduras holding intense and exhausting meetings and implementing big decisions. At the end of one of these long, somewhat stressful days, we sat around our house in Concepcion telling our war stories of our younger days. Remember that scene in Jaws when police chief Martin Brody, oceanographer Matt Hooper, and Captain Quint finally sit down in the boats cabin and begin to bond. They’re telling stories, each outdoing the other with how scarred they had become from life events. It’s a macho, competitive bonding, but a bonding none-the-less. Then the shark starts banging on the boat, first subtly then violently, and for the rest of the movie, the three have to put aside their macho attitudes and work together, even to the point of sacrifice.

That was how our stories were being told at our house in Concepcion. One particular story, and I will attempt to protect identities here by not saying who told it, was particularly pertinent. Apparently in the early days of Shoulder to Shoulder, this particular individual was trying to make himself useful. He had no particular medical skills, but there was a construction project at the time. He found himself breaking up rocks with a sledge hammer (a very common activity at construction sites in Honduras). Next to another volunteer also breaking up rocks, his male ego spirited him into competition, his pride insisting that he could break up more rocks than the other guy. His ego darn near killed him. Later in the day, the doctors at the site needed forms to record their medical encounters with patients. This was something he knew he could do, so he ran off and made the forms. When he came back with them, the same man with whom he had been breaking rocks, complained that the forms were too big. They wasted paper, a precious commodity in Honduras. He ran back, mumbling to himself, but desperately wanting to be of assistance. He remade the forms, found scissors and cut the paper into fourths, and came back with them proud and in need of someone’s gratitude. Of course, no one thanked him. 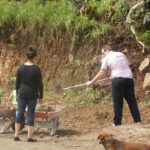 At this point, his rock, paper, scissors game had left him somewhat disheartened. He wanted to be the winner. He wanted to feel that he was needed and important. Maybe this mission work thing wasn’t for him after all. Let alone that he wasn’t the hero, he wasn’t even appreciated. But maybe it was then that the shark started banging up against the bottom of the boat. Someone carried a seriously injured man to the brigade team. Everyone needed to drop what they were doing to assist. Within moments, without consideration of any rocks, paper, or scissors, without a desire to win or a fear of losing, he desperately applied pressure against the man’s wounds. He was covered in blood. When it was all over, he sat alone to reflect. He only then understood the meaning and import of service. He realized it was not about his need to feel important or appreciated, there weren’t any winners or losers, but it was only about collaboration and the sincere response to need.
Shoulder to Shoulder has just implemented some major changes in its structure and its organization. We’ve done so, as I see it, because we are growing. Our organization has expanded the scope and size of its service and mission. There is simply a great deal more to accomplish and our administration is more demanding. There is also more pressure to increase our resources to meet the mission. It is a time of great opportunity, and also a time of great challenge. With so much change and growth, so much pressure, and great demand, there may be a tendency to become self-centered. It may cause us to think I can be the hero, I will be the one to lead and save us. This game of rock, paper, scissors would be a fool’s journey. Better that we recognize how we got here in the first place. It was a collaborative effort, a commitment in service and partnership, a working shoulder to shoulder to bring about substantive and sustainable change. This is an honorable mission that supports and sustains the dignity of all involved: those who serve and those served. 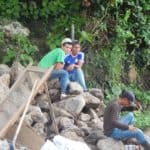 Laura and I are honored to be part of Shoulder to Shoulder. We ask for everyone’s shoulder of commitment as we continue and expand this mission of dignified service.