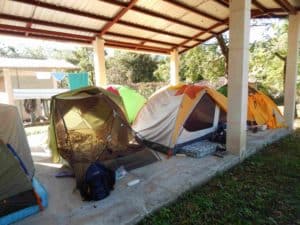 November 22, 2014
She hasn’t had a good night sleep since coming to Honduras.  It isn’t sleeping in a tent on a concrete floor under the stars.  The tent, after all, is placed over a semi soft mattress.  It’s not the time change, only an hour’s difference.  The tropical warmth doesn’t seem to bother her, even though she does live in Wyoming and it is mid-November.  Those squirmy and crawly things are close by, but she’s not the type to jump up on a chair at the threat of a mouse.  What is it then that keeps her awake half the night?  She had once been told, and always believed it to be true, that roosters only crow to greet the sunrise.  Actually, and this is not scientifically proven, roosters crow because they abhor silence, beginning their wrenching screams sometime around midnight and only slowing down sometime after dawn.  Unfortunately, here in the frontier region of Intibucá, in the small village of Agua Salada, this tone-deaf choir outnumbers the human population by at least three to one. 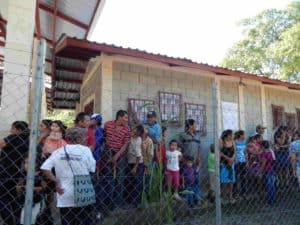 Crowds waiting to be seen 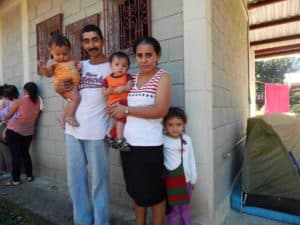 On Tuesday she is dragging a little bit.  Perhaps that’s why the brigade leaders have given her light duty, fitting and distributing reading glasses.  Still, when it’s real slow, she might be asked to assist with an injection or minor surgery.  On occasion the pharmacy gets busy and she’s called over to fill prescriptions.  On Monday, one of the leaders guessed that they saw about 120 patients.  Perhaps everyone had shown up on the first day, but on Tuesday there are actually more.  The word must be traveling to the more outlying districts.  Whether tomorrow will bring more, or whether it might start to wane, no one is sure.  But hundreds come, lined up for hours, to see one of the four doctors available; to get a diagnosis, a prognosis, a word of assurance and comfort sometimes in broken Spanish and sometimes via translators, a medication, a treatment, and some relief. 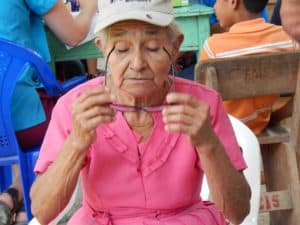 If that is all the Wyoming Brigade does, it’s certainly a great deal.  But the generosity extends beyond the clinic and into the homes and lives of the residents of Agua Salada.  They came with hygiene supplies.  They came with school supplies.  They now provide school scholarships for five local children and look to provide more.  This is not simply about a generous gift, but rather it is about the commitment of relationship.  The University of Wyoming partners with the community of Agua Salada and Shoulder to Shoulder such that enrichment, development, transformation, and meaningful growth are deeply rooted into the hearts of all involved:  brigade members, beneficiaries, community leaders, and all who are committed to the relationship.
Later in the day when the lines are receding, the young nursing student who hasn’t gotten much sleep due to the rude roosters, might have slipped away to grab an hour or two siesta.  She doesn’t speak Spanish, but all day long she’s been using the international language of play with children.  I spy her now with two girls, maybe seven and eight years old.  They are fully engrossed in a game of “patty cake” — mimicking, mirroring, and hand slapping.  The smiles on their three faces, the sign of commitment and love, are the most powerful medicine that the University of Wyoming has distributed all day. 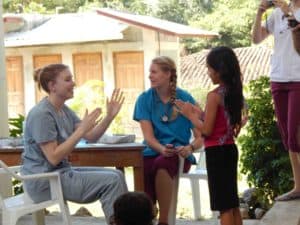