editor’s note
Ed Zuroweste, his wife Candace Kugel, and staff and students from Johns Hopkins University have been coming to Honduras with Shoulder to Shoulder for many years.  They hoped to form a medical brigade this year, but unfortunately did not encounter sufficient commitment to make the trip meaningful. But Ed and Candace still decided to visit. They also brought a friend, Sandra Grotberg, who did some violence prevention training in the local communities. Ed and Candace also did some amazing things while they were here. Laura and I were so grateful to meet them and learn from their experience.
Sometimes trips down memory lane leave us disappointed in the journey, as all things change and, most often, the changes are not those we envisioned. Gratitude takes humility. Candace’s reflection on 16 years of involvement with Shoulder to Shoulder and her and Ed’s fateful intersection with Honduran families, give us pause to stand in awe of the miracles generated from goodwill and integrity. Their witness is a sincere embodiment of what it means to work ‘shoulder to shoulder.’

During a recent visit to Santa Lucia, we had opportunity to spend time seeing patients with the young doctor at the Centro de Salud.  As seasoned preceptors, we were happy to see that he approached children gently and with a smile, provided abundant patient education and prescribed antibiotics and other medications judiciously. The best thing about this doctor, however, was that he was someone we had known since he was a shy, gangly kid — Rigoberto, the fourth child of Don Beto Marquez, the once Santa Lucia maintenance director, now watchman, and his wife Deisy.

Rigoberto at the Health Center

My husband (and family doctor) Ed Zuroweste and I mark the time we have known the Marquez family—and our tenure with Shoulder to Shoulder—by the age of their son Fernando, now 16. On Ed’s first Shoulder to Shoulder trip in 1999, he accompanied two medical students—one Honduran and one American—to the Marquez family home to attend Deisy’s labor and birth of their ninth child. The Honduran medical student was beaming with joy at the wonder of his first birth experience. He was overjoyed and in tears when the parents asked if he would allow them the honor of naming the baby after him—Fernando.

Since then our countless trips to Intibucá have always included a social call to the Marquez family in addition to the usual work of patient care, student supervision, home visits, and midwife and community education projects. Over time we developed strong connections to both our “Honduran family” and to the communities served by Shoulder to Shoulder.  Returning in February 2016 was something of a homecoming for both of us since two years had passed since Ed’s last trip and I had not been to Intibucá since 2009. This trip, the first time without students, gave us opportunity to visit, catch up on recent changes in the organization, the community of Santa Lucia, and our friends there. 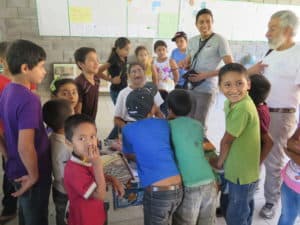 Rigoberto and Ed at a local school

On our arrival the clinic was clean, calm and operating smoothly and we were introduced to staff. Shoulder to Shoulder now supports well over a hundred employees in the country and although groups continue to come in large numbers, their service contributions increasingly represent more of a valuable and necessary assistance than a crutch to the permanent infrastructure. My feeling of not being essential, rather than hurting my feelings, reminded and assured me of the goal of creating a sustainable program that would eventually function independently. 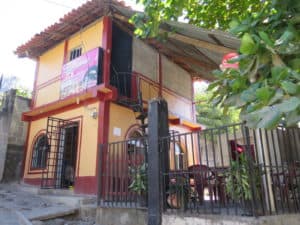 The town of Santa Lucia itself was familiar and the changes that we noticed were subtle, yet significant, signs of modernization—more cars and trucks, taxis (!), Maria’s “Cafeteria Cincinnati,” other new businesses, the paving of the town center, colorfully painted homes, and a general air of tidiness. Lest we find ourselves too comfy, however, our digs at the clinic had no electricity and no water when we arrived, and we were told not to expect internet access during our stay. 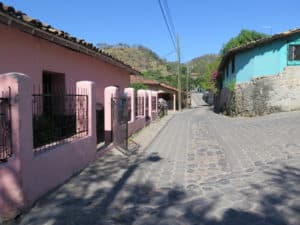 Watching Rigoberto in action both in the clinic and in the community allowed us both to feel the full impact of realizing the sueňo that has motivated us over the years to support this mission. We were aware that he had completed his medical training and was well into his year-long servicio social in Santa Lucia, but experiencing the embodiment of that monumental accomplishment was particularly gratifying. And when that body is a smart, caring young man with an easy smile, it was enough to stir up something akin to parental pride.
On February 19, 2016   /   News