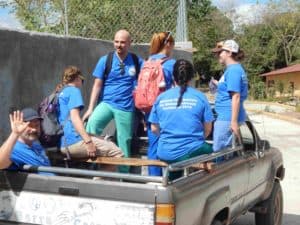 January 24, 2015
From what I heard, Buffalo, NY had about a thousand feet of snow this year.  I would assume the nine graduate students and one professor from the University of Buffalo, School of Pharmacology experienced quite a shock last Monday when they arrived here in Honduras.  They certainly did pick the best time of the year to come.  They ended up at Shoulder to Shoulder’s clinic in Santa Lucia, one of the hottest, driest, and lowest spots in all of Honduras.  The climate must have been a great shock, though perhaps a welcome one, to their bodies.  The culture shock must have been pretty intense as well.  They took two days to get to Santa Lucia from Tegucigalpa.  They spent Monday night in a nice hotel in Siguatepeque about an hour and a half outside Tegucigalpa.  The next day, however, was about five and one half hours over and down the mountains, four of which they traveled on the treacherous dirt roads, washed out and eroding.  They arrived to be confronted with trickle showers, low power electricity, spotty and slow internet, the new ways of a new people, and everyone speaking Spanish.
Shoulder to Shoulder is excited to have the University of Buffalo here for the first time.  The pharmacology school offers a unique brigade experience.  They offered workshops with various groups like the pregnancy club in Magdalena where Laura and I met up with them.  They were able to offer insight to the women relative to what medicines can and can’t be taken during pregnancy, how pharmacology works in health in general, preventative care strategies, etc.  The doctors and nurses at the various clinics and health centers were impressed and pleased with the brigade work.  The doctors and nurses, and even the health promoters, are so often overwhelmed dealing with large volumes of patients and emergencies that they don’t find the time for teaching prevention and home health care.  The work Buffalo did was tremendously valuable and greatly appreciated. 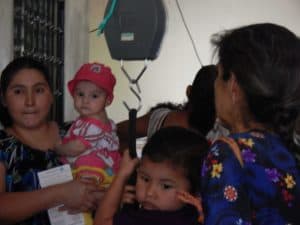 The students were thoroughly enjoying their cross-cultural, service experience.  None of them spoke Spanish, though the interpreters were excellent.  Many had been to foreign or developing countries in the past.  Their leader student, Ciera, had been twice to the Dominican Republic on service trips.  She hopes that this early commitment from Buffalo will be a long and meaningful one for the school.  We hope so too.  Speaking with one of the participants about how he was experiencing the culture and the people, he paused and thoughtfully reflected.  He shared that so much of person’s lives in the US are consumed with the acquiring of things.  Here people are much more present to other people.  People really take sincere interest in one another, and things are just not so important.
We are certainly taking interest in you, Buffalo.  You have so much to offer.  We thank you for your generous, unselfish response.  We will be looking forward to your return.  Hopefully it will again be in January so you can all get away from the snow, ice, and cold. 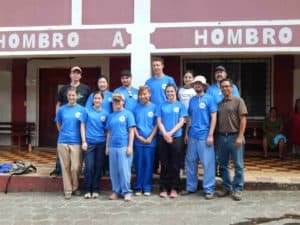