Laura and I are on vacation now.  We are on the tropical island of Roatan, off the North Coast of Honduras.  I guess I would have to say it’s exactly what you would expect from a tropical paradise.  We took a self-guided motor scooter tour up and down the island yesterday and the expansive views of the ocean, the wildlife (iguanas climbing up palm trees a few feet from our bungalow porch), the laid back attitude of island life, all draw us into an “isn’t-this-the-way-life-is-meant-to-be” mood.  But both Laura and I are notoriously bad at vacationing, and this one comes at an inopportune time with a great many changes and challenges facing Shoulder to Shoulder.  So when we’re not tooling around on a motor scooter, we’re making phone calls or desperately trying to maintain an internet connection.  We sneak onto the porch of another unit in order to find a suitable signal to receive and send emails.  It’s hard to say what we feel guiltier about, working while we are supposed to be vacationing, or vacationing when we know there is work to be done.  So we split it down the middle.  That American work ethic drive seems to be imbedded in our DNA.

This is a new Honduras.  A running joke between the two of us has been to look at one another and comment, “Toto, I’ve a feeling we’re not in Intibucá anymore.”  We started our vacation with a conference for NGOs doing development work in Honduras in Tela, another vacation destination on the North Coast.  The conference was held in an exclusive, luxury resort, and it was a bit surreal to consider all these people working amongst the poorest of the poor coming together in a place that could only be thought of as a dream for most Hondurans.  On the second day of the conference, however, we witnessed an impassioned presentation by a Brazilian nun who works with children returning to Honduras after deportation from the United States.  The surroundings could not soften the terror of a world where inequity punishes the innocent heartlessly.  We’ve seen many of these children on the Frontier of Intibucá.  Because of our common commitment with other conference attendees, we made valuable connections and bonds.  We also had a day after our conference for an outing on a boat tour.  I fished in the ocean for the first time in my life, catching a very large (at least as far as I was concerned) King fish that we later had for lunch.  I swam through a tunnel at an isthmus, though I did panic with the surge of the currents.  I propped myself up against the rock wall and now have the scars on my back to prove it.  But I made it through.  Even on vacation, my experiences here are always fresh and startling.
Then on to Roatan on a Ferry out of La Ceiba.  English, Spanish, and Garifuna are spoken here, and the island is well developed because of tourism.  Money doesn’t necessarily change everything, but it has an obvious impact on some things.  The man who is renting us our little apartment here commented that he is displeased that there are so many potholes on the roads.  I had to laugh.  First, most of the roads here are paved.  Second, my understanding of potholes has radically changed since living on the Frontera.  Potholes used to represent minor inconvenience for a driver and passengers and the anxious thought that a few more miles had been subtracted from the life of a tire.  Now I understand potholes as treacherous challenges to navigation, roughly equivalent to tidal waves for a sailor.  There aren’t any real potholes here. 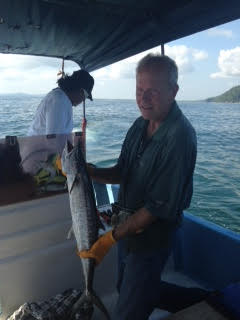 So Laura and I are here in this tropical island, half enjoying our vacation and half trying to maintain our connections in administrating Shoulder to Shoulder, attempting to lose ourselves in the pampering of luxury, but remembering that most of those we know and serve will never experience even a taste of such abundance.  We are here, but not altogether, and we remain anxious to return to our beloved Frontera where life is more easily measured by less elusive values.   Two days before we began our travels we managed to visit Dr. Doug Stockman from the University of Rochester.  He has a brigade team with him in the little village of San Jose in San Marcos de la Sierra.  Doug has been there in the little village 25 times.  He and his brigade teams have established meaningful relationships of empowerment and dignity with the people of the small village.  While we sat with Doug at breakfast, a typically dressed woman entered carrying a large plastic bowl.  It was filled with bread that she was selling for a couple of pennies.  This is a common sight for Laura and me.  I actually recognized the daughter with her as someone I had seen on the busses selling the same bread.  The woman smiled.  We smiled back, and politely said thank you, but we wouldn’t be buying any bread.  She continued to smile, came closer to us, whereupon Doug recognized her.

She is part of Rochester’s micro loaning program.  Her business of selling bread, oatmeal, and tamales to the townspeople and travelers along the highway, is financed by small loans of about $150 or $300.  She was actually there to pay back the capital and the interest of 1% incurred over a six month time frame.  Doug engaged her and Laura and I translated.  She could not be happier or more grateful that Rochester has given her this opportunity.  She has two businesses, one is the selling of the food items that she prepares, and the other is raising a few chickens and some pigs.   The food selling business is going great.  She lost all of her chickens to a disease, but she was able to sell off one of her pigs to buy more chickens.  She is certain they will soon be laying eggs and she will be making a profit.  I observed this woman as I translated for her.   I felt humbled by her as she beamed with pride and a sense of confidence and self-worth.  She was feeding and providing for her family, a singular ambition, a dream fulfilled in a relationship formed in dignity and respect.  I think of her now as I am relaxing in this island paradise.  How much more opportunity is present among these Island people who vacuum up the dollars of foreigners who dive in their oceans and bask in their sun.  And yet, I do not see any greater pride or a deeper sense of fulfillment.
What wonderful things I am privileged to see.  I am in a tropical paradise.  Every day of my life is filled with new wonders of how rich the human spirit is.
On October 30, 2015   /   News