One of the things I often find quite humorous living on the Frontera, where there are no paved roads, is asking for driving directions. One typical answer might go something like this: “Once you cross the river (literally crossing through the river), you should look off to your right and take that road. Look carefully, because it may be difficult to recognize it as a road. After that, you’re home free, providing of course your truck does not go careening down the 500 foot cliff.” Even odder than the answer for directions, is the answer for how long any particular trip will take. The answer is always the same: a short, somewhat insecure, pause followed by the answer of “twenty minutes.” Nothing here is only twenty minutes away. It usually takes about an hour to get from one town to the adjacent one, and that’s on the main road (‘main’ being an adjective used very liberally). The answer of twenty minutes is either denial, pure and simple, or perhaps a wish. It may also be an acknowledgement that if roads were paved, it really wouldn’t take more than twenty minutes to get from any place on the Frontera to any other place. 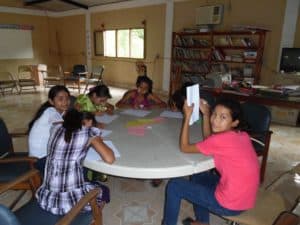 But they aren’t paved, and traveling here is something of a metaphor for how difficult, bordering on impossible, it is to get anywhere. But on Saturday, November 7, Damaris Quintero and Kate Clitheroe, who run the Yo Puedo girls’ empowerment program, along with the assistance of Damaris’ husband, managed to transport ten sixth grade girls from all over the Frontera to the southernmost town of Santa Lucia for a twenty-four hour retreat. Getting them there was quite a challenge. But that challenge dims in comparison to the miracle of where the program Yo Puedo is getting them. The roads of opportunities for young girls living on the Frontera are even more impassable than the roads between the small villages. The huge potholes along these roads, the rivers that need to be crossed, the dangers of ditches and cliffs that present themselves at every corner, are so negating of any journey that most girls end up simply stuck. They often become mothers much too young, a generational, cyclical poverty spins them into a limiting destiny. The road is lost. 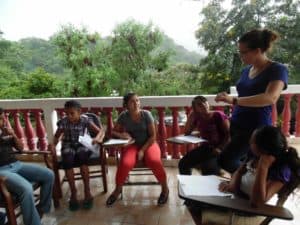 The ten girls who made the journey to the Santa Lucia Clinic and the Yo Puedo retreat represent nine Yo Puedo schools. In the Yo Puedo program the girls are learning that they can make their own decisions about who they are and who they will become. They do not need to be stuck along the side of the road. The retreat presented the same theme, but in a way to honor these young girls who have been so very committed to the program. The theme for the event was how to be a young person who goes against the current, the current being society’s pressures that often stifle someone’s own decision making. In the retreat they named and took ownership of their talents, learned the processes for making informed decisions, and decided what they would do to go against the current. At the closure, they shared their life goals, and perhaps it was not a surprise that among them were doctors, dentists, lawyers, and teachers.
To be honest, it is not clear whether these young women will realize their dreams. They may in fact be overcome by the harshness of the journeys they have already begun. However, one thing is clear. If these young women do not believe in themselves, the greatness they possess within themselves, then nothing will ever change for them. The Yo Puedo program and this Yo Puedo retreat has started them along an incredible journey. 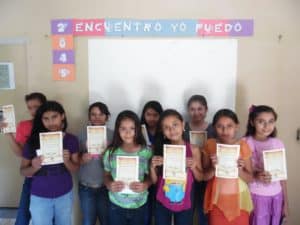 Ready for a new world

The road is not what impairs the journey, but rather the unwillingness to take it.
On November 21, 2015   /   News