25 Years: The Dignity of Working Shoulder to Shoulder 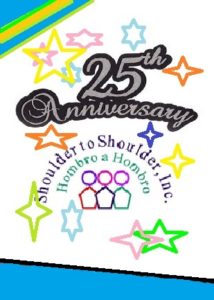 January 15, 2015
The 1969 war between Salvador and Honduras, sometimes referred to as the Soccer Wars or the Hundred Hours War, left many parts of Honduras bordering El Salvador isolated, with shortages of basic services and infrastructure.  These effects last into the present day where, in the southern section of the department of Intibucá, services and infrastructure remain scarce and tenuous.  In 1990, the small municipality of Santa Lucia suffered disproportionately the price of a war two decades past.  Here there was no physician, no non-profits or relief agencies, no electricity, and the only water came from the community tap in the center of town.
Meanwhile at the University of Cincinnati, Dr. Jeff Heck, part of the junior faculty, was organizing a medical brigade to Honduras to be sponsored by Ruth and Daniel Castro from the Christian Medical and Dental Society of Honduras.  Could any of the participants on that brigade really have known what they were getting into?  Had they known, would they have gone?  And what amazing things would spring forth from the innocence of their good will!!  A team of twenty, including five physicians, slept on the floor at the school and municipal building.  They worked from sunup to sundown and saw 4000 patients, assisted by the public health nurse, the only medical professional working in the area.  The community asked them to return. 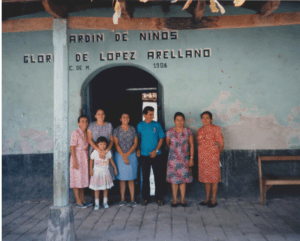 Hombro a Hombro Board

At this point, anything could have happened.  The University of Cincinnati might have thought the project a folly and ended their support and funding.  The project could have continued by way of sending brigades year after year to simply respond to physical needs.  But what did happen was so much greater and so amazing.  Relationships were forged, formed, and evolved, creating a synergy that profoundly transformed the lives of everyone committed to those relationships.  In 1993, with money left over from a $1 million grant to study diarrhea among travelers to the tropics, construction on the first clinic began.  A team of professional builders volunteered much of their time and talent, many of the building supplies were donated, and Chiquita Brands assumed the expense of shipping materials.  Good will, service, caring, and the integrity of human relationship united to become a permanent site for healing and development.
After four or five years, Daniel and Ruth Castro suggested the name Shoulder to Shoulder, becoming interchangeable with Hombro a Hombro.  Few organizations title themselves according to their philosophy.  In extensive conversations among faculty at the university, among students and brigade participants, among community members in Cincinnati and Honduras, it was clear that this project would not survive or thrive save for the intricate participation of those served, the Hondurans themselves.  The living of that philosophy was as much practical as it was ideal, given that so few from Cincinnati spoke Spanish and were only in Honduras once or twice a year.  Whatever the motive, the philosophy secured the dignity of the persons served.  Shoulder to Shoulder, Hombro a Hombro, became sustainable as Hondurans themselves took ownership of the service, care, and empowerment that has always identified its vision and mission.

In tribute to Shoulder to Shoulder and in anticipation of the reunion brigade scheduled for May of this year, Dr. Jeff Heck reflects,
“Some of the best people I know have been involved with Shoulder to Shoulder from all walks of life, all with different perspectives, faiths and otivations.  The majority have been motivated by a genuine concern for people left behind and have been willing to make great sacrifices on their behalf.  Shoulder to Shoulder has done much to help physicians, nurses, dentists, and other health professionals restore their idealism that motivated them to join their professions in the first place. I count myself fortunate to have watched radical transformations in many people. Thus it is difficult to say who benefited the most:  the Hondurans or the North Americans who came to ‘help’.”
All of this because twenty-five years ago, twenty people came to Honduras to offer some limited, medical service.  Imagine!!
On January 15, 2015   /   Uncategorized