March 9, 2015
It’s hard to imagine which is more mysterious and challenging, the terrain or the persons who inhabit it. 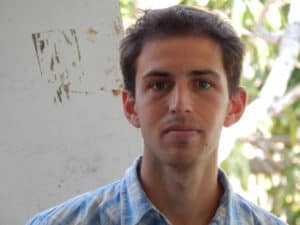 Joshua Back, a fourth year medical student at University of Rochester, has taken nine months off from purely academic pursuits to live and volunteer among the people of San José, San Marcos, Intibucá, Honduras. The university, collaborating with Shoulder to Shoulder for almost a decade of brigade work in San José and the surrounding communities, has invested in relationships of empowerment and development. Josh is deepening and broadening those relationships and discerning the best future practices for the university in its global health outreach in this small corner of Honduras. He met us a few weeks ago at the small bus stop called El Rancho, about a half hour walk from his house, to give us an interview and a tour.
From the highway, everything slopes down at a 45 to 70 degree grade to the river, perhaps two miles. Across the river is a mirror image, climbing at the same steep degree to the most isolated communities in the area. Twenty minutes after meeting us, we’re at Josh’s house, the brigade quarters across the street from the university’s clinic. The walk was an easy one, all downhill. The dirt road is well maintained by Honduras standards, possibly because no one here owns a car to drive on it. An occasional delivery vehicle dares the steep grade. Later in the day we’ll see newly placed telephone poles. The Honduran government drove them here and dropped them on the shoulder of the road. The locals carried them to where they needed to go, dug out the holes, and secured them in the ground. All without any equipment! At his house, Josh informs us we will be walking down the mountain to the community of Portillon. With the aid of the Central American bank, the local school has added seventh and eighth grade, and next year, ninth. There, Josh and the teachers will present the seventh and eighth grade students with donated supplies from the First Unitarian Church in Rochester. Josh asks us how much water we have. When we tell him we have a bottle to share between us, Josh packs three additional bottles and we head out his door. What have we gotten ourselves into? 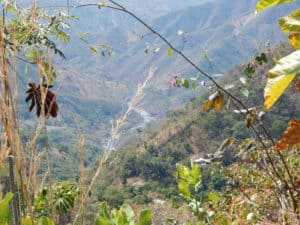 Half the time we walk along the road, and the other half along mountain paths. The road is longer, zigzagging sharply to lessen the severity of the slope. The paths drop precipitously, the footing is precarious, but the views are awesome. It’s easy going down, save for the tightening of calf muscles, but there is the nagging realization that for every step down there will be a corresponding step up. We meet persons along the road and path, walking or in their homes. Josh stops to speak with them all and to introduce us. His Spanish is a little halting, but he clearly makes himself understood. The Spanish of those living here, however, is heavily accented and harshly abbreviated. With very little formal education and even less contact with the larger world, the locals cannot understand that what they are speaking only roughly approximates Spanish. But Josh’s ear and his whole person has become attuned to the people. He listens intently. Sometimes he still doesn’t understand, and he asks them to repeat. This might take three or four times. Admitting that you don’t understand, highlighting yourself as an outsider, is to place yourself in a very vulnerable position. It’s uncomfortable, unsettling, and creates a sense of insecurity. It’s usually simply easier to pretend that you understand. But the patience and integrity that Josh demonstrates is what draws him into a relationship of trust with the people. It is clear as we walk with him that Josh is well known and well respected among these people.
Josh is a medical student, soon to be a doctor. The empiricist in him must certainly understand the axiom “the shortest distance between two points is a straight line.” But there aren’t many straight lines here. A straight line down or up the mountain would most certainly result in either a mortal accident or a coronary. A straight line to the people would create fear and mistrust. It is often the circuitous route that yields a quality result. That is not an empirical principle, but more properly the understanding of a social scientist. Josh did not present so much as a doctor, but rather a social worker. 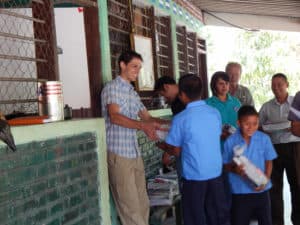 Then we arrived at the school in El Portillon. The people here are poor, but the little they have, they have achieved by taking long and arduous journeys. They now have a seventh and eighth grade. Prior to now, if a family wanted a child to be educated beyond the sixth grade, they would have to send the child to either Concepción or San Marcos. Because of the long travel, because of the crooked lines, the child could not commute in the same day and would have to board. That expense prohibited further education for almost everyone. The community found a way. The community has always lacked running water. But as we are visiting, the construction of the holding tank is being completed. The water will be piped from two kilometers away, a spring the community managed to purchase. The community found a way. Josh seems to recognize the tenacity and industriousness of the people as he participates in the ceremony, distributing school supplies. They are just a few small items, a few notebooks, pens, pencils, markers, erasers, and a small calculator. But the gesture demands a grand celebration, another leg of the journey complete. 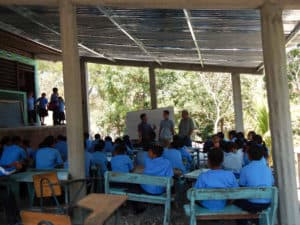 Then we need to head back. The directions we travel are so varied and complex. To go down means to go up. To go right means to go left. And to look out over the great expanse of mountains and sky, to be overwhelmed by the awesome beauty of nature, means to stand at the edge of a cliff. We arrive at Josh’s house. Josh, much younger and in better shape, is accustomed to the climbs, while we are exhausted. We rest a while before we’ll return to the highway. Josh offers to accompany us, but just as we are preparing to leave, a man stops into visit. He’s difficult to understand and Josh is asking him to repeat. There seems to be something on his mind, something he needs to discuss, but the conversation is anything but direct. Patience, Josh, this looks like it will be another long journey along very winding routes. We take our leave, certain that the University of Rochester will get an excellent report on their mission in Honduras from their social worker, I mean, medical student, Josh Back.
It’s hard to imagine which is more mysterious and challenging, the terrain or the persons who inhabit it.