February 27, 2015
Dr. Hans Rausch was our family physician until I was seven or eight and he retired.  I have a lousy memory for things of my childhood, but I well remember this man.  He was short and chubby, wore oddly tailored and color clashing clothing, and sported a mustache that today I would recognize as ethnic.  He spoke with a pronounced, German accent and had difficulty with English syntax and expressions.  He’d tease me with a St. Nick chuckle, and he always called my mother ‘Mama.’  He had those old Highlight children’s magazines in his waiting room.  I loved to go and see him.  I suppose I remember him so well because he was so foreign.  I didn’t know any other Germans when I was six, and I don’t remember any of my later doctors.  The foreign, particularly to a six-year old, can be threatening.  But rather than a memory of fear and regret, his gentle, kind character yields a soft, welcoming recall, and I’m involuntarily smiling as I write this. 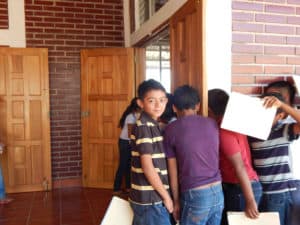 Brown University with Wingate University came down on a brigade last week to the small village of Guachipilincito.  I never had patience enough to learn phonetics and I imagine most reading this didn’t either.  Roughly, it’s pronounced “watch (light on the ‘t’ sound) + the letter ‘e’ + pea + lean + sea + toe.”  When I think of foreign, I think of Guachipilincito.  Though it’s only two or three miles from Concepción, it’s an hour and a half on foot and an hour by a four wheel drive vehicle.  Birds can get there in a matter of minutes, but any creature limited to ground travel is subject to a challenging quest.  It’s not a place to visit.  Unless you live there, you don’t go there.  Those who do live there, stay there, unless they need to stock up on supplies.  The Guachipilincito people are poor, isolated, independent, and “of their own.”  For persons from the US, there’s the foreignness of Honduras coupled with the foreignness of Guachipilincito. 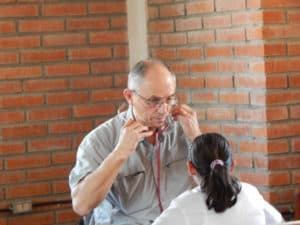 Laura and I visited Guachipilincito and the brigade last Tuesday.  (You can read about how we almost didn’t make it there at https://manshipblog.wordpress.com/.  But please finish this blog first.)  We were surprised by what we found.  It didn’t feel foreign at all.  In fact, the overwhelming sense was one of familiarity.  The doctors and the pharmacists were seeing children from the fourth, fifth and sixth grade.  The children stood in line, not anxious or fearful, but joyful.  Like all kids do, they fooled with one another, but no one was out of control or acting up.  They waited in line with patience as if they had all done this a thousand times before.  As they moved up close to their turn to enter the examining room, their smiles widened, not from insecurity, but rather with a joyful expectation.  We peered into the examining room and spotted Dr. Emily.  She was testing a little girl’s motor skills by raising her arms and asking the child to mirror her movement.  Dr. Emily wears a brilliant smile, the movements are graceful and uninhibited, and though we can only see the girl’s back, it’s clear the game is thoroughly enjoyable.  The scene is tribute to the beautiful ease of human connection. 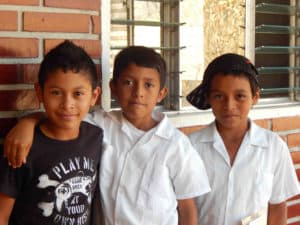 Dr. Emily, Dr. Wayne, and Dr. Tamika are all veterans on this brigade.  They clearly like being in Guachipilincito.  Robert, the pharmacology professor, and Kelly, the Wingate PharmD student are new to Guachipilincito.  But even they are absorbed into this air of familiarity as they fill prescriptions for the children.  All of them are in a place where everything is different, and yet they seem to be so at home.  To the children of Guachipilincito, the brigade members cannot be anything other than foreign.  To Dr. Emily, her husband Jim, Dr. Wayne, Dr. Tamika, Robert, and Kelly, the people of Guachipilincito cannot be anything other than foreign.  But this is not what seems to matter.

I wonder about this little girl who mirrors Dr. Emily raising and stretching her arms.  Maybe she’ll live out her days in this small, secluded village of Guachipilincito.  Maybe she’ll move out beyond the confines of such isolation and poverty.  In either case, she will remember Dr. Emily.  The sincerity of human kindness has taught her a priceless lesson.  Language, customs, and culture are not the things that separate, limit or determine us.  When employed with a willing and believing heart, they liberate us.