It Happened In The Rain

I have written a blog for every one of the brigade groups that have visited us in Honduras since Laura and I came to Shoulder to Shoulder almost three years ago. First, I think it is the least that we can do to celebrate and thank these groups that offer so much in the ongoing presence and mission of Shoulder to Shoulder. Second, I take some personal pride in being able to do this. But, on occasion we have not been as present to the brigade groups as we would like to be. That, unfortunately, was the case with the Virginia Commonwealth University / Fairfax Family Practice Centers / SAGE who were recently with us at their clinic in Pinares, San Marcos de La Sierra. Laura and I took a short vacation to the United States the day after they arrived. 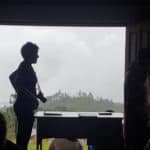 Sandra Tandeciarz, one of the brigade leaders 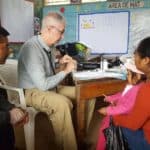 Michael Filak, one of the brigade leaders

We were fortunate to spend some time with the group on their first night in a hotel in La Esperanza. But we were off very early the next morning to catch our plane while they headed in the opposite direction to serve the people of Pinares. We had opportunity to speak with some of the leaders of the brigade about their ongoing work in Pinares. We are excited and encouraged by the continuing plans SAGE has to service the people of Pinares in development work even when the brigades are not here. 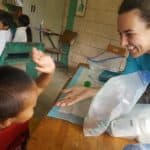 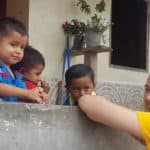 I don’t have much more to report other than what has been related to me by others. Jett is the pharmacist who has now come to Pinares twice with the group. The photos that you are enjoying have come courtesy of him. He was gracious in offering them to me, and as I asked him how the brigade went, he reported, “This brigade was certainly fantastic. The providers and students showed that a real team based healthcare system can work and that it can benefit any community.” This is certainly always true of VCU / FFPC / SAGE. There were a lot of teenagers on this trip, acting as translators and volunteering with the children. They seemed to bring a youthful spark to the activities. Jett’s photos certainly suggest that the smiles and laughter accompanied the brigade and extended to the children and families. 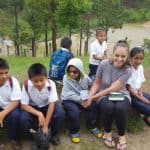 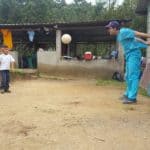 Edman, our Brigade Coordinator, shared with me that the brigade went well. Because I know them so well, I’m sure it was true. Still, Edman also shared that it rained constantly. Well, it is the rainy season and we get even more of it in this part of Honduras than others. The rain might have dampened the grounds, but never the spirits. Perhaps it even made some roads impassable by vehicle, but not by foot. It couldn’t stop VCU / FFPC from getting to where they were needed most, even when it took them three hours of hiking. It couldn’t stop their enthusiasm, and it certainly couldn’t stop the laughter and joy the group always creates. 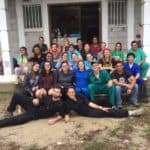 Thanks for coming. We’ll be sure to be here when you come again.