The Boys at the End of the Road

The boys had been there all day long; three scruffy looking kids, probably 9, 10, or 11, years old, inseparable, taking in all of the unique goings-on. The Americans had come to their small village of Matazanos and had set up their health clinic at their school. The Maine Dartmouth Family Medicine Residency program and Long Island University, School of Pharmacy, had teamed up for the third year to offer medical services in and around the municipality of Colomoncagua. This would be their last full day of their trip, and Laura and I had tagged along with them. It would turn out to be a most successful day, seeing over 100 patients in this very remote area. 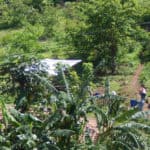 Matazanos is one of these tiny villages splattered all over the remote area of Southern Intibucá, never far in distance from the central municipality, but always a memorable trip. We took two pick-ups. With the team, the supplies, and the translators, the cabs and the beds of the pickups were packed tight. As we wound along the narrow, rutted out, washed out, muddy pass, I would hear whoops and hollers from the passengers in the bed as we slipped into a rut, climbed steeply up a hill, or passed under branches.  The road is here for the occasional truck — never a car — that has to bring something in or out of Matazanos. The locals walk trails that are more direct, and probably in much better condition. In any case, the less than seven mile journey, even less on a straight line, took us about forty-five minutes before we reached Matazanos at the end of the road.

We arrived at the school, first through sixth (they were building the kindergarten), to a throng of children who, thanks to us, had the day off. The group panicked at first, thinking they needed to see each of the kids. But that would not be the case, they’d only see the kids who had health complaints. About mid-morning, all the kids got treated to a yoga session where they got to stretch like the mountains, the sun, cows, dogs, and cats, and make wonderful sounds. It was great exercise, disguised as a fun game (or perhaps a fun game disguised as a great exercise). The kids loved it. 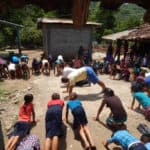 I kept noticing the three young boys. They played in the yoga game, and loved it. Unlike the other kids who wandered in and out of the school, these three hung out all day long and seemed to be having the time of their lives.  At one point, the three of them were lined up with their faces pressed against the bars of the window to one of the classrooms. Inside, the pharmacists and the pharmacy students were preparing the medications for the providers’ prescriptions. They were reading books and using apps on their telephones to understand the medications. The young boys had never seen anything like this. For them, it was the magic of alchemy. The Americans might just as well have been performing brain surgery.
Around lunch time I got a couple of minutes to speak with them. Their first question to me was where I and the visitors had learned English. I don’t think they understood when I answered that English was their first language, just as Spanish was theirs. As we were packing up, the boys were finally getting ready to leave. I got a few more minutes with them. I learned their names and a few other things. They wondered what the United States was like, but they had absolutely no context in which they could understand. All three of them had traveled to Colomoncagua (a one hour walk) which, for them, was the city. Though one of them had been to Camasca (a 45 minute car ride), that was as far as they had traveled. None had ever been to La Esperanza, the one place in the whole area that actually could qualify as a very small city. I asked them what they hoped to do when they grew up. They answered by way of their experience – they wanted to be farmers. I asked about being a policeman, or even a doctor like the ones they were seeing today. They giggled, such a fanciful idea from the strange gringo. 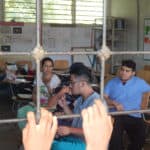 Checking out the Pharmacy

Their worlds are so small and their opportunities so limited. They will not go to school beyond the sixth grade. They will never travel beyond a ten to fifteen mile radius. But, oh boy, do they have curiosity! And I wondered who would ever nourish that curiosity? Who would ever help them to give some form to unfocused dreams? I0n a sense, Maine / Long Island gave them a great gift today:  the ability to catch a glimpse of possibilities. Perhaps it is only a moment, a passing entertainment; something like taking a peek behind the tent at a traveling carnival. Still, isn’t there a great deal more hidden in the curiosity of young children? Maine / Long Island opened a door, and beyond the door, an unknown world. Perhaps if Maine / Long Island continue to come and build relationships (they already have and they have every intention of continuing), one of these boys, or any number of the children who come to know them, may find a new road. 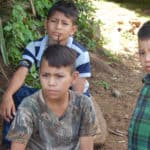 Curiosity is a powerful thing. It won’t be satisfied or stifled. It is, of course, what causes many from here to dangerously cross borders and arrive without documentation or permission in the US. But curiosity, well-formed and given proper context, yields discovery and invention.  Maybe, with the help of persons of integrity and generosity, such as those from Maine / Long Island, some of their curiosity and their dreams will flourish into new life. 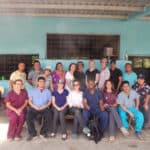