Wyoming, Home Away From Home

It’s been a particular long and challenging brigade season. From January 7 through March 26, 2017 we have given welcome to six separate medical teams onto the Frontera. Apart from these official medical brigades, we have also hosted two groups traveling with our board president, Wayne Waite, who came to strengthen and extend our education mission, as well as a couple of special visits. During that period, there has only been about ten complete days when we were not hosting visitors, about 100 of them in all. We pick them up at the airport and transport them from there to here and all around. We make sure they have hotel rooms, tents, mattresses, mosquito netting, or at least a stretch of ground upon which to sleep. We provide them translators, or we sometimes are their translators. We make sure they have food to eat, beverages to drink, and guard against a Honduran microbe that might make them ill. We see to it that their journeys and the services they perform are meaningful for them and for us. It’s a lot of work. And so, when the Wyoming / Agua Salada brigade flew back to the States on Sunday the 26th, we did breathe a sigh of relief to know we wouldn’t host another brigade until the last week of May. Still, it’s a bitter sweet feeling. Yes, we will have a little more time to rest, but we will also miss our friends. 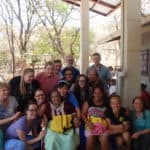 Wyoming is the best example. They were the first brigade that Laura and I met when we took our position with Shoulder to Shoulder in November of 2014. Linda, the leader of the Wyoming brigade, was there then and she has been on every brigade since then, a total of six trips. Though we’ve never been to her home in Wyoming, she’s become a dear friend. The same for Ron, the doctor, and Larry the dentist, who so often travel to the small community of Agua Salada.  It’s sad to see them leave and know we have to wait another eight months for their return. We will miss them. They too, I think, will miss us.
They really can’t be called visitors anymore. There is too much familiarity. Linda, like the student that sits in the same seat in her classroom, sits on the same seat on the bus for the six hour trip to and from the airport every time.  And she scurries every time she arrives in Agua Salada so that she can place dips on her favorite place to sleep. On this trip, Ron introduced me to a man for whom he removed a skin tag from his eye years ago before the clinic was even built. Larry extracts hundreds of teeth on every trip, but on this trip he proudly announces that a few patients are asking him to save a tooth rather than simply yanking it out. This is progress — a result of years of working to change a cultural understanding of dental hygiene. Larry is also intimately familiar with the septic system at Agua Salada. It doesn’t work so well, and there is nothing that will breed familiarity better than intimacy with a broken septic system. They don’t live here, to be sure. After a week or ten days, they fly off again to homes in Wyoming, very far away from Agua Salada. But they don’t really qualify as visitors anymore. When was the last time you sent your dinner guest out to unclog your backed up toilet? 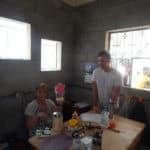 Linda and student Justin Preparing for the partera luncheon

But this is what makes this service of Wyoming so special and effective in terms of a mission of development. There are a lot of brigade groups that come to Honduras. There are companies here that serve their every need. Like Laura and I and Shoulder to Shoulder, they pick them up, provide for their transportation, housing, and food, and present them to communities where they perform their services. But it is the differences between those companies and us that are striking and telling. First, that’s all they do. They have no medical mission apart from the groups they host. They have no relationships with the towns and the people they bring the groups to. The groups they bring are not committed to the people they serve. They see them once, they pull some teeth, give out some Tylenol and anti-parasitic medicine, and in one to two weeks, they are flying back to the States. This is not a bad thing to do. It’s definitely valuable service.  But, in the end all they are is visitors. Visitors are not invested, and because they are not invested, the work they do is not transformational. There is no development. Wyoming, on the other hand, comes home to Honduras. That is what makes the difference. 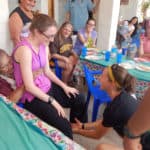 Bringing about life in joy

Larry recognizes a change in the sense of dental hygiene only after years of attempting to teach people the value of good, dental care. Ron sees a man year after year who he was fortunate to once remove a skin tag from his eye and give him better sight. Linda knows the parteras (midwifes) well enough to ask them about the children they have brought into the world. She hosts a luncheon for them. They share their stories. The eighty-six year old midwife, who has been one since she was fourteen, tells how she has never taken a payment for her work. Instead she explains to the group how after the birth, she does the laundry and cooks the meals for the mother who needs rest. Linda, well familiar with this woman’s life journey, asks her how she involves the father in the birth of the child. Then something truly incredible happens. The eighty-six year old midwife takes the role of the husband. A student takes the role of the mother.  The student taking the role of the mother sits on the midwife’s lap, who encloses her in a tight embrace. It makes us all laugh. But we see how it takes commitment and embrace to welcome life into the world. 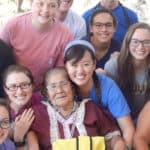 If they were visitors, none of this would happen. Trust, dignity, and an abiding understanding of the worth of relationship is what engender development. The students that come are indeed visitors. They are there for the first, and frequently only, time. They learn techniques in the administration of medicine. They learn about the challenges of providing health care in a developing, resource challenged area. But they also learn that without an abiding commitment and the dignity of relationship, its value is limited to the effectiveness of a single intervention. But health, well-being, and development:   these things require that you take the time to become comfortable in someone else’s home. These are the things that Wyoming brings to Agua Salada.

Wyoming —  welcome home wherever that may be.