We were so pleased a couple of weeks back to welcome Ohio State University and Buckeyes Without Borders to the Frontera of Intibucá for the first time. It seemed a bit strange that it was their first time here on a brigade in as much as Shoulder to Shoulder has been all things Ohio since its founding twenty seven years ago. It was somehow appropriate that they stayed in Santa Lucia where Shoulder to Shoulder first stepped foot on the Frontera. The presence of history was with them. In some ways it felt like we were welcoming our distant cousins for dinner for the first time. But in other ways they were truly new and unique. 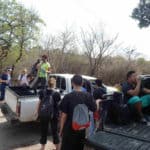 Buckeyes Without Borders reached out to us in the Fall of 2016 to discern the possibility of arranging for a service trip. They are a professional student organization. Most of them were Doctor of Pharmacy students. They were excited to come and they certainly trumped up the interest for their first excursion with Shoulder to Shoulder. They faced the challenge of finding medical providers to join their brigade. At first this looked grim as they only found one provider and she wasn’t from OSU or even Ohio. But we managed to hook them up with three additional providers looking to join up with existing brigades. That changed the distinctive Ohioan flavor as the doctors came from across the US, giving the brigade an intercontinental flare. They ended up with twenty participants. That’s a pretty big number for us and presented us with a few additional challenges. They stayed at the main clinic at Santa Lucia, taking up all of the available bunk beds and mattresses; a few of them slept on couches and floors. They did field clinics each day, so they all piled into the beds of three pickup trucks and bounced along rough roads for an hour or more to arrive at distant villages. It was a good thing they were mostly young.
So the “Ohio connection” kind of set us up to think that this would be a familiar experience. But it was anything but familiar. New and innovative, Buckeyes Without Borders has opened up a new chapter for Shoulder to Shoulder and our service to the small, isolated communities in the rural Frontera. 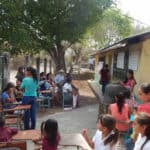 At the clinic in Santa Teresita

About a year ago I was walking to the clinic in Concepción and I noticed a group of about six children looking up into the sky and pointing at something. Naturally, I looked up but didn’t see anything out of the ordinary. I went over to them and asked them what they were so excited about. One answered me, “It’s a plane, right?” and then I noticed what I had missed before. A jet stream slowly marked a path across an otherwise blue sky. I was of course too familiar with seeing jet streams to even notice, but to these children it was something new and exciting. About two months ago, I and Laura were at the bilingual school. There’s a large soccer field just beyond our property. First we heard it, then we saw its descent to the soccer field. A military helicopter was transporting some important figure to Camasca. Everyone came out to see it, and of course school was interrupted for the moment as all the children gathered to gawk at the once-in-a-life-time sight. Other than the birds, things usually don’t fly above us or descend among us here on the Frontera. When they do, they cause great excitement. 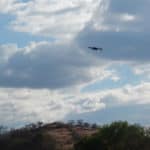 In a sense, OSU and Buckeyes without Borders flew above us and descended among us. Actually, this happened quite literally. Laura and I met up with the brigade the day they traveled to Santa Teresita. In this very small, isolated clinic, the brigade saw about one-hundred patients who had been lined up since early in the morning.  In the early afternoon, the crowd had thinned out a bit, and I stood outside in the blistering heat. I heard a buzzing, and assumed a nest of bees had been disturbed. But then, in a déjà vu sort of way, I noticed a group of children looking up and pointing. Once again, I couldn’t see what was causing the excitement. Paul Woo came with the brigade group as a cameraman, videographer, and documentarian. Apparently, among his apparatus he had brought a radio controlled drone that was now circling the heads of the remaining residents of Santa Teresita and videoing the scene. This is not a very ordinary sight in Santa Teresita and I imagine for years to come families will be talking about it. Later in the afternoon we traveled to the river that borders El Salvador so that we could take a swim and cool ourselves off. There were a number of locals there. The arrival of the large group of Americans got everyone’s attention. Then the drone came out again. The Americans were oblivious. The Hondurans fixed their gaze upward. Manna from heaven. 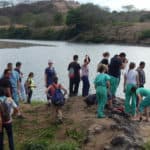 Things fly over us and descend among us causing great excitement. It’s mostly about the novelty of it all. The jet flying overhead in Concepción and the helicopter descending into Camasca stirred up the crowds by the sheer oddity of happening. And yet, no one’s life was altered, nothing really was permanently changed, just something out of the ordinary. OSU and Buckeyes Without Borders were certainly out of the ordinary both for Shoulder to Shoulder and for the Hondurans in and around Santa Lucia they came to visit. But they did more than drop from the heavens. They met people, they served people, and they connected. They will be remembered not only because they flew in, presented themselves as something new and unique, then flew out again. They will be remembered because they invested themselves in the lives of those whom they met. They too will remember how they were touched by the people they came to serve. Yes, flying overhead and dropping out of the sky is certainly impressive and exciting. I suspect when OSU and Buckeyes Without Borders return, those who they came to serve will point back to the sky and become enlivened. It will not be because they are seeing something unfamiliar. It will be because those whom they have come to know are returning.