February 21, 2015
The brigades do amazing work while they’re here and Virginia Commonwealth University (VCU) is no exception.  This VCU brigade arrived with a substantial group of residents and doctors from Fairfax Family Practice Centers (FFPC), the primary supporting organization for this brigade.  The clinic in Pinares that they founded and support is located just off the highway, a rutted out, treacherous, mountain, dirt road heading south from La Esperanza to the border of El Salvador.  Because Pinares is only forty minutes outside of La Esperanza and because the road is much nicer here, still paved in sections and prior to the precipitous drop through the mountains, one could be deceived that the people who live here are better off than their neighbors further south.  But, the people here are extremely poor, amongst the poorest in the Department of Intibucá, indeed in almost all of Honduras.  It is a very desolate area where most families survive on subsistence farming and a tiny amount of income during coffee harvesting season.  They seldom find their way out of Pinares. 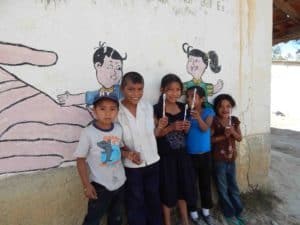 In some ways it is as if the circus has come to town.  The brigade arrives in a festive air.  The foreign doctors, nurses, pharmacists and students, their medical instruments and supplies, and even their luggage present a novelty.  But the people come with serious purpose.  They have not even had the opportunity for health care since the last time a brigade came through.  We arrive to visit them on a Thursday morning.  Half the brigade members stay at the school where they also camp out and have their meals.  They are seeing local children for the CHI (Children’s Health Initiative) program.  Heights and weights are recorded, eye exams administered, and blood checked for anemia.  The children see a doctor, a pharmacist, and get a dental exam.  The children are precious, smiling, laughing, and playing.  They love to pose for Laura’s camera, and they love it when a brigade member takes a moment to ruffle their hair or poke them in the belly.  They patiently wait their turn and hold their breath when their finger is stuck, drawing blood for the anemia check.  They’re like all kids really, full of life, a sense of wonder, freshness and hope.  But their clothes tell you they are not like all kids.  Torn, stained, and faded, a size or two too big or too small, poverty is their inheritance.  Many of them will not travel beyond the four or five square mile area that is home. 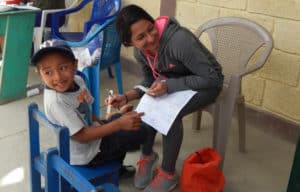 A few kids are sent over to the clinic because they present with a problem that can’t be resolved with vitamins, antibiotics, toothpaste, or Tylenol.  One boy, maybe twelve, has a half-dollar sized wound on the ball of his right foot.  Maybe it’s a burn from stepping barefoot on one of the ubiquitous rubbish fires.  The tongue depressor pressed against the surrounding skin tickles, and he giggles.  Odd that the lilt of laughter portends infection.  We take the fifteen minute walk over to the clinic where we meet up with him and his mother again.  She looks lost, not knowing what to do, perhaps the strange white persons and gowns, the unintelligible voices, and the crowds are overwhelming her.  She has to sign in to wait her turn, but she is hesitant to do so, and maybe if we didn’t help her through it, she would have left.  Poverty makes you vulnerable in so many ways. 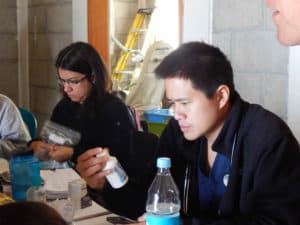 We get some time to talk to Dr. Winston, the brigade leader whose been coming down to Pinares for many years.  I sense great compassion and commitment for these people he serves so well.  We ask him about the brigade’s accommodations at the school.  It is a very run down building with dirt floors, dark, dank, and dusty.  Why hasn’t VCU constructed some dorms as other affiliates have done, after all you’re here at least three times a year?  He says they’ve often considered it.  But, he wouldn’t feel so comfortable in a nice dorm knowing how most of the people here live.  Besides, the money could be better spent.  When we’re ready to leave, the young man with the wound on his foot is still waiting to be seen, but his mother seems more comfortable waiting.
While we wait for the bus to take us back to Concepcion, we purchase a light lunch at the roadside kitchen just below the clinic.  A young boy is sitting on a bench.  He has on big, rubber boots, farmers clothes, and carries a machete.  He’s stunted.  Is that because of his Lenca heritage or poor nutrition?  He looks about the same age as the boy with the wound on his foot, but maybe he’s older.  Could he be fifteen, eighteen, maybe even twenty?  In any case, he’s too young to carry such weariness in his face and his eyes.  He tells us he’s never been to Concepción, the neighboring town.  Maybe he’s never been to La Esperanza, just a short trip up the road.  His life seems much too narrow.  We get on the bus.  We know that the work VCU and FFPC is doing is so very important, but it’s hard to celebrate.  The mood is somber and sober, our quiet witness to the palpable poverty.

Almost every night in our humble, but very comfortable, house in La Concepción, we are serenaded by at least one, often two, evangelical church gatherings.  We listen to the rhythmic, rat-a-tat, Christian hymns that draw the congregation to the service.  They’re a little droning, even jarring, until we hear the preacher booming out an emotional, tear-jerking sermon.  It’s what Concepción has for entertainment.  Generally we laugh at the routine, but tonight after Pinares, maybe we’re hoping for something a bit more uplifting.  The pianist at one of the churches is apparently more accomplished than the simplistic Christian hymns would indicate.  Warming up for the service, the musician performs something of a small concerto.  I recognize, but can’t name, the first soft, moving, but complex piece.  It draws Laura and me out on our porch, listening, and soaking in this precious gift.  The next tune is from the Sound of Music, A Few of My Favorite Things, followed by Carly Simon’s Killing Me Softly.  We stand in silence, holding on to this moment for ourselves as much as for the people of Pinares.