So Close, Yet So Far Away

Brown University built and operates the clinic at Guachipilincito, the small community about an hour’s walk or an hour’s drive from Concepcion.  That sounds strange to say to those of us that are accustomed to cars driving along well paved roads, or distances that can be measured by a straight line extended from point A to point B.  These assumptions don’t apply to Guachi, a place very close and yet so far away.
Brown has been coming down for many years.  They are physically present in a brigade two times a year, but their presence there is more constant then that.  There are various programs and supports that they have invested in for the people of Guachi that connect them to the wider world.  But it’s very hard to maintain.  Maybe it’s like building a sand castle along the shore during low tide.  That’s not to say it’s a fool’s errand, but just that as close as one gets to Guachi, it seems to stay far away.  But Brown has built buildings and relationships, is committed to ongoing service, makes the journey regularly, and something, though elusively hard to define, remains. 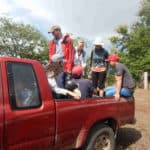 On the way to Guachipilincito

I was looking forward to meeting the nine person brigade, Brown University now partnered with Wingate University, School of Pharmacy.  Wayne Hale, a man of great talent and knowledge, is always asking penetrating questions because he readily recognizes the inadequacy of his talent and knowledge.  I was looking forward to the stimulating conversation, the discernment of strategy and service, but the necessary response to unanticipated challenges kept Brown/Wingate, Wayne, and Guachi distant.  Two of their brigade members, one a medical student and the other a resident, found themselves even further away from Guachi as they did not make it onto the planes flying from the US to Honduras.  I went to Tegucigalpa on the next day to escort them into the Frontera; six hours in for me and eight hours back for them.  They got there a day late, but that is not so surprising when you think of the almost insurmountable chasm of distance between Miami or Atlanta and Guachi.  I never got to Guachi during their week here.  Another brigade in Camasca, the presence of a board member and the need to translate, innovative and exciting improvements at our bilingual school, and a series of other demands made that distance to Guachi even further.  Thank God there’s two of us, because Laura did get there. 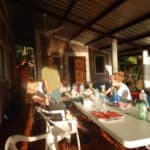 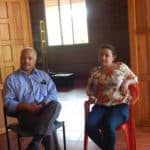 I didn’t get to Guachi.  On the day that they were leaving, they hiked into Concepción.  A truck would transport their luggage to their bus.  The bus can’t get to Guachi because of the road.  The bus would pick them up outside of our house in Concepción.  I met them in the town square during market day:  vegetable, fruits, venders, and pirated DVDs in every corner.  They were all smiles, shaking my hand and introducing themselves.  Their brigade was a great success.  I was feeling some guilt that I had not gotten to them or to Guachi in the week that they were here.  They, however, treated me as an old friend, and were excited to get to my house and see Laura again.  At the house, they rehydrated after the arduous, hot, hour plus walk over mountain and dale.  They had a few minutes to relax on our porch.
I spoke with Lynn, Wayne’s wife.  I apologized for not getting to see them this week.  We also talked about how sometimes it’s hard to know what’s best to do with limited resources and Guachi being so far away.  She told me of a woman she met.  The woman suffered with dwarfism and her feet were turned out perpendicular to her body.  She walked with great difficulty.  They had found some paper and traced the outline of her feet.  With that they managed to buy shoes that fit her.  She walks easier now.  Lynn’s take on the whole thing (something she and her husband have been involved with all of their lives) was that you do what you can with what’s placed in front of you in the moment.  What more can be expected?  That was what she, and they, did for the woman she met.  I thought about these great distances.  This one woman was probably further away from the rest of the world than anyone in Guachi.  Yet, she was found.  She was met.  She was honored.  Maybe Guachipilincito is not as far away as it seems. 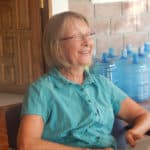