They descended upon the Ipsan Nah Hotel (perhaps the title is taken from “Itzam Na,” the supreme deity in the Mayan pantheon, but I’m not certain of this), about twenty young professionals, twenty and thirty somethings:  pre-med students, med students, pharmacy students, pharmacists, doctors, and other professional staff from MAHEC (Mountain Area Health Education Center) in Asheville, North Carolina.  They squeezed into the all too small lobby of the hotel for their first night orientation before traveling south to the Frontera and the small town of Camasca in the morning.  I’m always a little bit awestruck by the surreal incongruity of these groups thrust into a Honduran environment.  There is a striking otherness to them reflected in their height, their physical presence, their clothing, their gait, and a million other identifiers before even considering the foreignness of their articulate English.  This is even more highlighted as they are packed into this small space, listening to us expound upon the necessarily cautious and considered manner of engagement.  I watch as patrons of the hotel enter the lobby.  They freeze at the door, a deer-in-the-headlights look washes over their faces, as they consciously deliberate how to navigate through the horde of foreigners.  One has to wonder why they are here, how will they be received, and what will they do?  From this very limited perspective, this snapshot view, the only conclusion is that they are terribly lost, took a bad turn somewhere.  A further conclusion might also be that they are, or will be, afraid, when confronted with how distant and different they are. A paralysis will set in and they will be completely overwhelmed and ineffective.  But there is something else, something the snapshot view can’t capture, something the rash conclusion doesn’t consider.  Their expressions betray an enthusiasm, even an elation, that they are readied for an unparalleled experience.  Ostensibly, they have come here to serve, and certainly that service is needed and appreciated.  But there is something else they bring, and something else still that they will find, that is as precious as it is indefinable.  I leave them that night in the hotel wondering what will come of their time in Camasca. 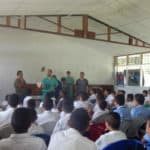 Adolescent Boys and the Basketball

Because other demands draw us, Laura and I will not meet up with them for another week when their time is drawing to an end.  On Wednesday, we do go to Camasca for an event at the bilingual school.  We are hoping to see them, planning on it, but even as we head up the bumpy road to the town, a sub group of them herded into the bed of a pickup truck are headed in the opposite direction.  I actually wave at them, but they are oblivious to our presence as our windshield is tinted and they can’t see us.  They are laughing, bouncing up and down in the pickup, on their way to some remote village and its clinic to offer medical care.  Later we head over to the main clinic where we think the other half of their group will be seeing patients.  But we are foiled again as this is the one day that two groups went out to separate, remote villages.  We speak with some of the clinic personnel.  “How is the brigade doing?” “Oh, they’re wonderful.  We love them.  They’re so energetic, and they’re working so hard.”  We spend the whole day in Camasca, but don’t see any of them.  They’re off doing the medical thing.  I guess they’re doing okay, but I feel slighted for having missed them. 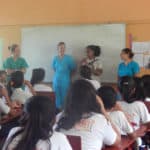 Laura and I check their schedule.  On Monday (they’re leaving on Wednesday), they’ll be at the high school and a few of them will visit the bilingual school.  We decide to meet up with them.  At the high school, they’ve divided themselves into two groups.  Male presenters meeting with the adolescent boys, and female presenters see the girls.  They’re discussing all those delicate, teenage issues: sexuality, sexual health, mental health, well-being, etc.  It goes as anyone might expect, as it would in any high school throughout the world.  The kids sit with their arms folded, desperately trying to look bored and uninterested, but secretly clinging to every word, and praying to a gentle God that they will not be called upon to answer a question or give comment.  I’m with the boys and the men, of course.  They’re passing a basketball out to the students.  When they catch it, they’re supposed to answer the questions.  They like the basketball, but do their best not to catch it.  There is nervous giggling and laughter, but I’m looking at the expressions on the brigade participants.  They are animated, beaming even.  They are glad to be here.  Their clothes, their manner, their presence are all the same as they were on that first night in the hotel.  They are seemingly just as foreign, just as out of place, as they were then.  But no, that is not correct.  In this short week, something has happened.  They have given something and they have received something, and because of this exchange, something is new.  It is a something that defies both definition and explanation. 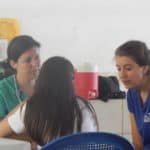 After the gender-specific group sessions, many of the students had opportunity for individual, brief medical consultations with brigade members.  The brigade members rotated in and out of lunch and Laura had some one-on-one time with them.  There was a deep spirit of satisfaction among them that was invigorating.   Laura and I escorted the two pharmacists to the bilingual school.  They had a toothbrush for each student.  On the way we stopped at a corner store to buy a bag of candy.  Toothbrushes and candy, the seemingly contradictory gifts were nonetheless well received.  Everyone is very happy.  I ask myself what it is that they have gained, what is it that they have given.  What will come of this?  I really don’t have an answer.  It is, however, something of incomparable value. 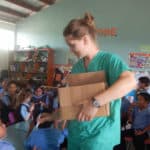 Distributing toothbrushes at the bilingual school