As I am writing this, Laura and I are on vacation in the US. We have, as always, an incredibly packed agenda. We started out in Denver, three days, in order to visit Laura’s son Gregory, my cousin Kevin and his wife Dolores, and their son Alex, who will be joining us for three months in August as a volunteer at the bilingual school. We also managed to tour the Rocky Mountain National Park at 13,000 feet. Breathtaking! Now we are in the greater Springfield, MA area to catch up with family and friends. So in four days we’ve traveled over 3000 miles. Everything has happened exactly as we planned it. Just this morning I realized that is what is putting me just a little on edge. There haven’t been any surprises. I’m not used to everything falling together as planned. I’m thinking something is wrong.

Efficiency is so highly valued in the US. But sometimes it is the unexpected, and the way we end up dealing with it, that identifies and marks us.

Virginia Commonwealth University, Fairfax Family Practice Centers, and the organization SAGE (Student and Global Community Engagement) that they have founded recently visited the clinic they built and sustain in Pinares, San Marcos de la Sierra, Honduras. They came with a thirty person team. Though that was a bit large for them and presented a challenge, they have done this so many times they have learned all the routines. They know what to pack. They know what to expect. In the week they were here, they managed to visit many of the outlining communities and assess the health needs of the children living there. They provided medical and dental consults, physical therapy, and a mission to maintain clean water in the small communities. They do incredible work with precise planning and expertise; a model of efficiency at its finest. Still, this is Honduras, so something will have to go wrong.

It was not a desperate phone call, but our brigade coordinator, Moises, had a hint of urgency in his voice when he told us the brigade was running out of meds only half way through their week. It wouldn’t be a problem, we planned on visiting anyway. We would pick up the meds they needed at one of our main clinics, and if we couldn’t find everything they needed, we could drive them to La Esperanza where they could purchase them. But before he hung up the phone he also told us a five year old had to be transported to the hospital in La Esperanza. He had a broken arm. Also not a problem, we could get him there. 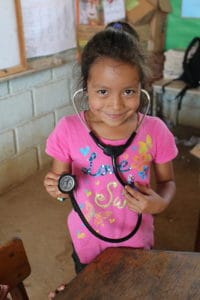 None of that was expected, but still it was a relatively easy fix. We got most of the meds. Chris and Logan would travel with us to La Esperanza to pick up the remaining meds. Our doctor/translator Jose would accompany our young man with the broken arm and his mother to the hospital. The hospital is always busy, and I worried that it might be all day, if not until the next, before they actually treated the broken arm. But we dropped the three of them off at the hospital and asked for a telephone call to update us. We found the remaining meds, and to my surprise got the telephone call that the arm had been cast. Dr. Jose also realized they might be waiting forever. He simply asked them to show him where the plaster was and he cast the arm himself. Everything was done within a few hours and we were on our way back to Pinares, mother and son in the back seat of the pickup with Jose, Chris, and Logan riding in the bed. This might not have been the most conventional means for supplying meds or setting a broken arm, but all things considered, rather efficient for Honduran standards. But then we offered mother and son a ride back to their home. 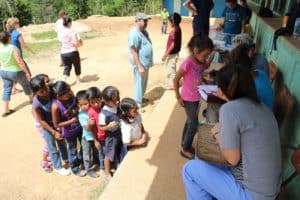 They had walked in the morning to the clinic at Pinares. She said it had taken them two hours, which is more than the typical “one hour” pat answer to that question. In fact, it took me almost an hour to arrive at their home in the car. Admittedly the car is not that much faster than walking considering the terrain over which we travelled, but walking this could not have been less than three hours. Now think about this. A mother walking with her five-year-old son, walking for three hours up and down mountains and over rocky terrain, walking with her son whose broken arm is neither set nor cast, and now perhaps we can understand why efficiency is not necessarily a prized value here. Their response was nothing more than gratitude.

VCU, FFPCS, and SAGE have once again done tremendous work at the clinic in Pinares. They prepared themselves well and followed an ambitious schedule. But it was what they did on the fly, for which there are no plans, that exemplified their unique style of compassion.