In the two and a half years Laura and I have lived in Honduras, I’ve become accustomed to being led around. That’s understandable. It’s not my country, and at least initially, everything is unfamiliar. The positives to being led around are that you build relationships of trust with your guides and you begin to discover things hidden under the surface. It’s an ongoing process of exciting discoveries, like the wonder of Christmas morning for a five-year-old. The negative to being led around is to be placed in that position of dependence and vulnerability. To trust being led takes moving beyond one’s comfort zone. It really implies sacrifice – doing something beyond the necessary with the hope that it will provide something better. Sacrifice and surrender.
Having so often been led around, it’s a good feeling to finally achieve the position of leading someone else. Such was our experience with AHOP (not to be confused with IHOP), A House of Prayer, a church community from Xenia, Ohio who recently came to Camasca to share and serve. While the team was here they sponsored a sports camp. They also spent some quality time at our bilingual school with our children. The church sponsors three of our children so they are very much committed to our mission of education. They hoped to meet a few of the families of our children while they were here. Laura and I knew just which families to bring them to, and how to get there. Just follow us.

“But there’s no road here,” one of the AHOP members bemoaned. We were standing on the cobblestoned street just outside the town center. I ducked down under a branch and gestured for the others to follow. The path is not at all obvious from the road and the thickness of the foliage would not offer any assurance that this was the way to any domicile. The group reluctantly fell in behind my lead. Along the path we’re inching our way down a sharp precipice. The view is incredible, looking down over about 2,000 feet, you can spot the Black River five or six miles distant winding through the mountain passes. But, could anyone really live down here? Down a rock-warn channel, passing bulls, cows, and calves along the way, over, under, and through barbed-wired fences, zig-zagging in and out of a pineapple grove, we descended. The earlier cobblestoned road now long forgotten, and yet in reality it was only a few hundred yards away. If I listened closely with my ears attuned to my heart, I could hear the incredulous thoughts, “But where in the world is he taking us?” Where indeed, fording a rill across a makeshift brick, up a muddy hill, and down along the other side, we arrived on the porch of Maria Dolores. She, her daughter Keilyn in second grade, and her son Bryan in kindergarten, were there to greet us. 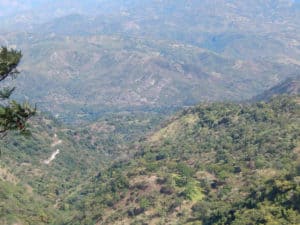 The Walk to the Childrens’ Homes

Everyone sat, resting after the tiring, somewhat anxiety producing, hike, on the plastic chairs already placed in anticipation of our arrival. We were welcomed with generous hospitality, Maria Dolores managing to provide us all with glasses of pineapple juice, no doubt freshly squeezed from the grove we walked through. Through translators she told us a bit of her story. Her brothers and sisters, with the exception of her brother German and his family, have all attended college and moved on to begin professional careers. She has stayed behind in this unlikely abode where she grew up to take care of her aging parents. Her mother, who was asleep while we visited, has coronary disease. Dolores has to take her to the doctor, obtain her medication, and take care of her father, her children, and her home. She tells us this matter-of-factly, with no sense of resentment or pride. She shares her hope for her children. She is grateful for the opportunity of the bilingual school, certain that her children will find the way beyond the confines of the situation they were born into. As she tells her story, as she reveals her sacrifice generously offered in hope, her visitors begin to bond with her. Josh, a pastor at AHOP, and Jillian share the story of their toddler son. He, like Dolores’ mother, also struggles with heart difficulties. From Xenia, Ohio, to Camasca, Intibucá, to this home hidden beyond the trees, the distance has lessened to nothing more than a knowing glance. Before we leave to visit her brother German and his family, we join hands in the warmth of prayer and thanksgiving. 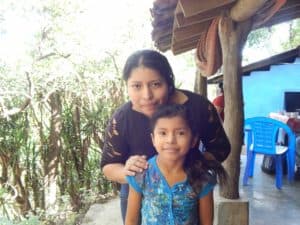 Her brother’s home is a two-minute walk away, though it too is hidden under the trees. Juan Carlos, a first-grader, sees us coming and gathers the chairs for us to sit inside his home. German is there with his eldest child, an adult daughter who has been physically challenged since birth. Iris stands at about the height of her six-year-old brother, Juan Carlos, and walks with severe difficulty. She can no longer make the trip into town on her own, but relies on other family members to carry her. Her smile is infectious as she pleasingly relates to us how she assists her mother, a teacher, with computer work, English classes, and documentation. Her mother cannot get home frequently, as her teaching job is in La Esperanza. German stays home, tending his personal farm and taking care of the family. He has two other sons, both of whom are attending college. When we hear this, there is a collective, albeit silent, gasp. How is it possible that this family supports two children in college? And yet again, like his sister Dolores, German relates his story without the expectation of pity or honor. It is simply what he has done because it is necessary. He himself may never, will never, leave this home where the journey to and from it is exceptionally onerous. But he and his wife will take care of their daughter and forge a wider path for their sons on their journeys from home. 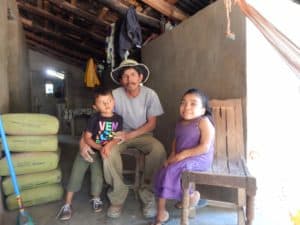 Our journey down began with a sense of uncertainty that produced insecurity. We could not see the way, what could lie beyond the trees or below the mountain. But we found a place of rest and comfort. We met with welcome. Leaving, climbing out, was hard. We would, in a sense, be going very far away. Yet having been here, the way back would be something forever in our memory. We had become, somehow, very close to these families hidden under the trees and below the mountain.

Thank you, AHOP, for your willingness to be led. We hope you discovered something valuable along the way, “a pearl of great price.” You will always have welcome.
On June 20, 2016   /   News