Did you ever feel like you were getting lost in the shuffle?  Mountain Area Health Education Center (MAHEC) must have felt that way while they were visiting Camasca on their brigade a few weeks ago. They were here for two full weeks, doing amazing work, but we must apologize for not giving them a lot of attention. I feel like I need to put some effort in my excuse for being so inconsiderate. There were only five of them:  three physicians, one pharmacist, and one exceptionally talented fifteen-year old named Henry (son of Amy, one of the physicians). Five people can easily get lost, right? Besides, the whole time they were here, we had all sorts of other, bigger brigades coming and going.  Our first ever surgical brigade demanded a great deal of our attention. Not to mention Brown/Wingate in Guachipilincito, VCU/FFPCS in Pinares, and a dental brigade jumping back and forth between Concepcion and Santa Lucia. February was one tremendously busy month. So, if the five people who spent time in Camasca felt as if they were neglected, you are probably right, and we’re sorry. But no one ever complained. 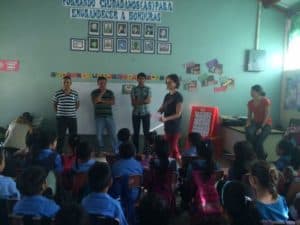 MAHEC brigade at the bilingual school

Perhaps I’m being a bit hard on myself. Truly, these five individuals were not at all demanding. If the squeaky wheel gets the grease, the quiet wheel simply turns unnoticed. The MAHEC brigade members unpretentiously arrived in town and checked into the local hotel. They got all their meals at the restaurant. Every day, they simply walked over to the health clinic or they spent some time at our bilingual school doing health screenings and playing with the kids. Henry, the fifteen year old who has fallen in love with the little town of Camasca, spent his days at the bilingual school. Henry was doing so well at the bilingual school that we were trying to sign him up as a volunteer. There’s that crazy little catch about having to finish High School. 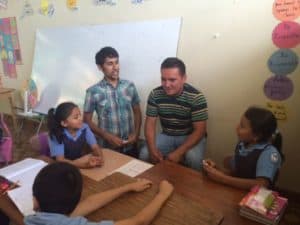 Down time at the school

He and his mom had been here before. MAHEC is very familiar with and well known by the town of Camasca. It wasn’t any big deal for them. I guess they just kind of blended in.  Their service was actually profound, but it was administered with such subtlety that it demanded no praise. I realize now why it was that the few times I had the fortune to visit with them I felt so relaxed. It was as if they were saying to me, “Look, just leave the special china in the cabinet. We’re good with the plastic ware.”  There’s an integrity in such service that we would all do well to emulate. 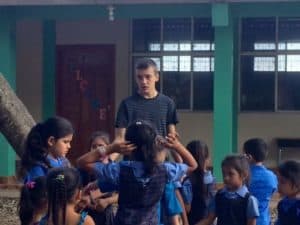 Henry with the kids

They seemed to do it all on their own with very little help from us. But lest you all think that we didn’t notice the amazing work you did, the beauty of the just relationships you committed yourselves to, and the special place you hold in the hearts of the people of Camasca and particularly the students at our bilingual school, we just want to say THANK YOU. I’m sure you’ll be back. Don’t forget to tell us when you’re coming.
On March 15, 2016   /   News