March 3, 2015
It is not so much that there is a fine line between poverty and injustice, in a more apt metaphor, they are two sides of the same coin.  Where there is poverty, there is some level of injustice contributing to it.  And where there is injustice, there is always some resulting poverty.  It is, I suppose, possible to address one issue without concerning oneself with the other.  It is, however, in my opinion, ineffective and disingenuous.  Poverty, not defined simply as a lack of resources, but more properly as a debasement of dignity, always implies inequity   and exploitation.  To attempt to enrich persons without empowering them is to leave unchallenged the systems that have sustained their poverty and to create new systems of exploitive dependency.  To rail against injustice without compassion for the poor is to be dismissive of complex and intricate relationships, and indiscriminately ignite a blaze that consumes everything along its path.  For substantive change, for development, for liberation, for empowerment, for whatever we want to call it, to occur, a sensitive, balanced response to the realities of poverty and injustice is required.  It is the rare individual that finds and appreciates that delicate balance, and their procuring it has usual come at an extremely high personal price.

On October 22, 2011, two university students were executed by members of the Honduran National Police.  One of them, Rafael Alejandro Vargas Castellanos, was the son of the rector of the National Autonomous University of Honduras (UNAH), Julieta Castellanos.  How does a mother reconcile herself to the shameful and senseless slaughter of her son?  How does a public figure reconcile herself to the violence and corruption of her government?  Perhaps these two questions and their variations have tortured Julieta Castellanos since that tragic day.  But those same two questions have also inspired and motivated her.  She demanded justice, accountability, and disclosure.  She initiated the beginnings of reform.  As she traveled further along this painful journey, she touched upon the heart of Honduras.  Would anyone have blamed Julieta Castellanos if she sought revenge?  But would revenge be a fitting tribute to her son?  Would revenge express her great love for Honduras?  Would revenge sate the hunger of her people for justice?  Her painful journey asks of her the more demanding search for reconciliation.  Maybe it is that soul wrenching search for reconciliation where the response to poverty and injustice meet.

Julieta’s journey brought her to one of the poorest municipalities in all of Honduras on Tuesday.  San Marcos de la Sierra pulled out all the stops to give Rector Castellanos a celebratory welcome.  Even in this, however, the degree of San Marcos’ poverty is highlighted.  The band that welcomed her so festively is not from San Marcos, but rather a neighboring municipality.  San Marcos de la Sierra cannot afford the instruments to have its own band.  But Julieta, and the other officials from UNAH, are gracious to have been so well received.  The university and Miguel Angel Bautista, the mayor of the town, are signing a covenant relationship.  The agreement commits the university to make available its many and varied resources to address the inadequacies and challenges San Marcos faces.  In the context of the meeting, Manuel Lainez, Shoulder to Shoulder’s Supervisor of Health Promoters at the San Marcos clinic, outlined many of the challenges:  personal and public health, unemployment, infant mortality, clean water, running water, electricity, infrastructure, and the list goes on.  Delicias is one of the many communities within the municipality that is isolated to the point of being almost unreachable.  It is reachable only on foot and that takes four hours.  Building a road would be a herculean ask, but perhaps one the university could consider. 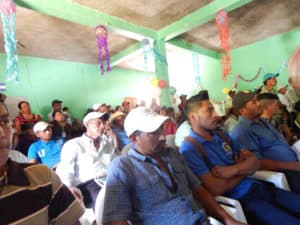 Over the next three years, UNAH will work collaboratively with Shoulder to Shoulder and the people of San Marcos toward development, empowerment, and the eradication of poverty.  When Julieta took the microphone to address the dignitaries, the press, and the citizens of San Marcos, she was insistent that they had not come to rescue San Marcos.  More importantly, the university was coming to partner, join forces, make alliances, and establish covenant.  We like to say “work Shoulder to Shoulder.”  Both parties have much to gain in their covenant, but perhaps more importantly it is about the relationship itself.  It is in the relationship where enrichment replaces poverty and where dignity, respect, and integrity secure justice.  It is that relationship, that difficult relationship, where the proper, balanced, sensitive response to injustice and poverty occur. 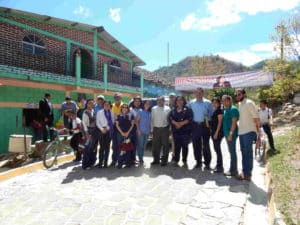 I felt personally very honored to have listened to Julieta Castellanos and witnessed the historic covenant agreement.  Julieta is a well-educated and accomplished woman, a social worker and sociologist.  She is competent and powerful.  She will pull together the resources of the university and focus them on the challenges that San Marcos faces.  But none of this is the reason for which I am hopeful and confident of success.  Julieta Castellano does not fear to embrace the pain of another.  The integrity of her love and pain for her son yield a just and caring response.