Laura and I love living in Honduras; we couldn’t be happier. Still, the differences between us and Hondurans, culturally, linguistically, and even physically, are sometimes highlighted. They are mostly simple things to note and they don’t present challenges, but sometimes they can remind you that you are the odd person out in this society. The sense of time and efficiency in systems often sets me reeling, and sometimes railing, as no one ever meets my standard for punctuality. Similarly, my sense of personal space and privacy is frequently undermined as others barge in on my protected territories. High school and grade school students who we pass everyday huddled in groups of five to ten try out their limited English on us. They always wait until we pass when we’ll hear the brave one among them voice a “Gud Mowning.” We’ll turn and smile and respond, “Good Morning, How are you?” They all giggle and a few others will join in with more comically enunciated good mornings. This will continue back and forth four or five times dispersed with the adolescent giggles. It’s a recognition of our differences under a certain amount of insecurity, but also a transcendence that the differences are not insurmountable. There are so many other things that betray our difference. We dress different, eat different, stand and walk different. The cadence of our speech, the way we act and react, and the way we think all define us as the ones who come from some other world. We change as we live among the differences, sometimes adapting to new ways and sometimes not, but we will always be recognized as outside looking in. 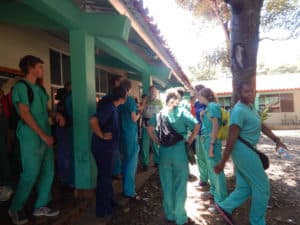 I was observing the medical service team MAHEC (Mountain Area Health Education Center, Asheville, North Carolina) a few weeks ago as they arrived in our little town of Camasca. They came as a twenty-three person team, working hard, visiting distant smaller communities every day, offering health care, delivering workshops in adolescent wellness at the High School, and sharing with the younger children at our bilingual school. Such a strong presence in such a small community like Camasca is hard to miss. Because Laura and I were particularly busy during the time they were here, we didn’t so much involve ourselves with their activities as watched them from a distance. I noticed them perhaps as a Honduran would. I saw them walking down the street from our street-side porch, dressed in their blue scrubs, walking very fast and purposely, presenting a different aura than I was accustomed to seeing on the street. They visited our porch most mornings as they could share our WiFi, check email, and post pictures on Facebook. I chuckled to myself to think of them as a herd of cattle of an unknown species that had wandered into our meadow. Still they were all well welcomed, honored by a sense of gratitude by their hosts. This, however, seemed somehow more than simply the thankfulness for their service. There was something noble about their presence that I could not define. I found myself thinking about this, trying to figure out exactly what it was, while they were here among us. 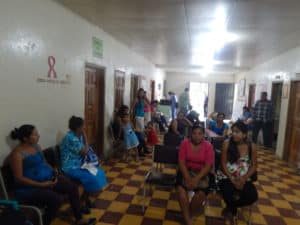 At the Camasca Health Center

On one of their days, they were visiting a small community called San Juan de Dios.  The mayor of our town, Julio, had lent a few of his pick-up trucks to the brigade, and on this particular day, he himself had driven them to the clinic site. Laura and I weren’t with them, but it happened we were in the same area visiting families benefiting from our nutrition program, MANI. Driving on the main rock/dirt road, we saw a man in a dress shirt, cell phone to his ear, and shovel in his hand. As we approached him, we recognized him. It was Julio, the mayor. We stopped and talked. He was filling in the ruts on the road, channeled out by the hard driving rains. He was doing this in preparation for the return trip with the brigade members who would ride in the bed of his truck. It was a humble gesture of gratitude, commendable in and of itself, but again I felt there was something more profound in that visage. Again, I felt there was something of great value in these acts, in this interchange. It was elusive, but again the word “noble” came to my mind. 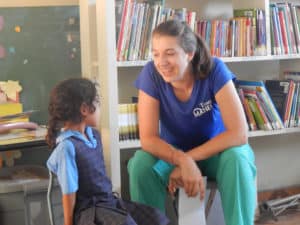 Laura and I were present at MAHEC’s going away celebration. There was cultural music and dance, a festive spirit. There were speeches in gratitude of MAHEC’s generosity and service. Then our mayor, Julio, got up to offer his words. He recalled some of the time he had spent with the MAHEC team while they were visiting the outlining communities and offering medical care. He began to recount a particular house visit and became emotionally choked up. They visited an older couple, very poor and very frail. They were most certainly coming to the end of life’s journey. There was nothing that the team could do for this couple, medically, but they shared their time with them, sat with them in their house by their bedside. It was this that moved Julio to tears, and he noted that next year when MAHEC would return, this old couple would likely not be with them. But for Julio this visit was of exceptional, incalculable, ineffable value. 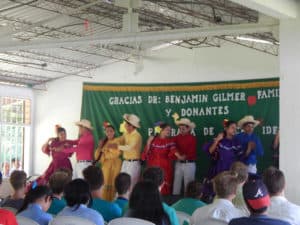 Listening to Julio, I then knew what it was that I had been struggling to understand and define while MAHEC was visiting Camasca. Indeed, it was their presence that was noble. At first glance, this group of medical missioners from the US presented as so foreign. And so they are. But we can all get beyond that in deference to the reason they had come. In the second instance then, we can give them credit and gratitude, for the great and generous service that they offer. This, perhaps, would be enough. Yet Julio was moved by something else at a moment when no service was even possible. This is a moment when differences are neither noted nor have any meaning. This is a moment in which service —  who is the giver and who is required to be grateful —  is also of no import. This is a moment when all judgment is discarded, and what remains is the value of human caring. This is noble.