Attorney Wayne E. Waite, President of the Shoulder to Shoulder Board, and Dwight Armstrong, Secretary for the Shoulder to Shoulder Board and CEO of Future Farmers of America (FFA), bopped around the Frontera this week with a maddening schedule.  Everyone wants to get the ear of the boss.  With only few days until the StoS board meeting in Tegucigalpa, important issues demand attention.  Laura and I met up with them in Camasca at the Good Shepherd School.   We had never met Wayne nor Dwight.  First impressions are so very important; for the third time since I’ve been in Honduras, I donned a button-down, collared shirt. 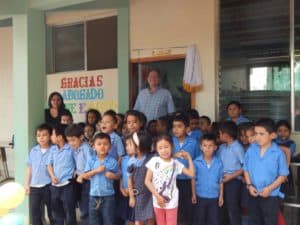 The children hosted a festive celebration and a classroom was named in Wayne’s honor.  Pomp and circumstance to serious deliberations, critical, tense meetings dominated the afternoon.  Still, Wayne had time for the contractor working on the newly begun construction of a second school building.  Standing on planks suspended over the foundation, I translated and learned how this man had built most of StoS’s clinics, starting with our first at Santa Lucia.  For all the attention being given to Wayne, how important was it to honor this man’s humble contribution; a builder who knows the import of strong foundations.  Meetings piled onto meetings without any breathing space.  Sometime mid-morning, Wayne and Dwight ran down to the mayor’s office to attend a presentation by the local contingent of the FAO (Food and Agricultural Organization of the United Nations). 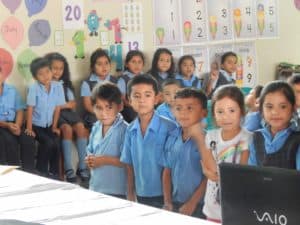 Dwight has dedicated his life to agriculture, particularly the education and inclusion of youth in health and nutrition and the sustainable management of our earth’s produce.  Shoulder to Shoulder is taking interest in agriculture and food security in the Frontera.  Almost everyone farms on the Frontera.  It is about the only thing here that resembles what might be considered a job.  Mostly it’s subsistence farming.  FAO’s presentation was about moving people beyond that; where education and sustainable structures empower people with production and pride.  It was an impressive presentation; a well-thought out, well-designed, systematic response with real opportunity for change.  StoS clearly could partner with such a program and mission.  Food security is another means to assist the journey from poverty to dignity.  Dwight was impressed and enthused.
Good systems and good mission colored the day’s theme.  Wayne is the responsible party for those good systems built around good missions.  Still, it can be so draining because the demands are very high, there is always a greater need.  Expand the mission, build another system.  It all looks perfect on paper, but spits, sputters, and whines in operation.  But lasting meaningful change demands close attention to the soundness of the mission and the effectiveness of the systems.  By late Wednesday afternoon, Attorney Waite and Mr. Armstrong were deep into the forest of what is Shoulder to Shoulder.  But what about the trees? 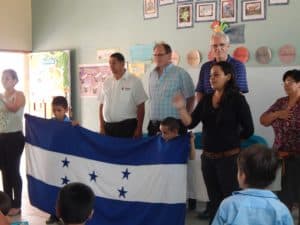 Laura and I were anxious to get back to Concepción.  It was late, and if we were to walk, we hoped to avoid nightfall.  Wayne overheard us and declared that he was going to Concepcion and would take us.  This surprised everyone.  It wasn’t on the schedule, he hadn’t eaten yet, and he would likely return  late.  He insisted that he was going, graciously offering us a ride, but secretive as to the purpose of his trip.  Being the boss, he gets what he wants.
Half way down the mountain, Wayne asks if we wouldn’t mind accompanying him on a short side-trip to Guachipilincito.  There is no such thing as a short side-trip in the Frontera, and we were aware it would be more than an hour out of the way.  But clearly this was the revelation of Wayne’s secret mission.  Our curiosity won out over our tiredness and we agreed to accompany Wayne and Dwight to Guachipilincito.  After the onerous, jolting ride down the rocky, single lane road, we sit in our car in the center of town.  It’s dark and no one’s out.  After a cell phone call, the town nurse arrives.  She gets in our car and directs us a short distance to a house.  In the small house, sparse furnishing greets us:  one, maybe two, straight-backed chairs, a variety of hand tools hanging here and there, and a unfinished, wooden table.  Hammocks suspend from the ceiling substituting for beds.  Another room or two might lurk behind curtained doors, but there is little more space.  The nurse, who the family knows, and five American strangers enter the woman’s home.  She welcomes us (as if this were an everyday occurrence); the cultural demand of hospitality not allowing anything but graciousness.  The matriarch, probably in her late thirties or early forties appearing to be in her sixties, stands above her eldest daughter.  The daughter holds her tiny baby; a newborn, anyone would surmise.  Two other younger brothers stare at us; the older of whom is clearly mentally challenged.  The rawness of poverty breathes here.  Wayne bends down to the baby, and, through the translator, the child’s grandmother converses, answering questions meant for the mother.  The child is ten months old and weighs eleven pounds.  His mother is fifteen.  One month ago, the baby only weighed six pounds so they are encouraged that the baby is finally retaining some nutrition and weight.  Wayne gives the grandmother a plastic bag that includes two cans of baby formula. 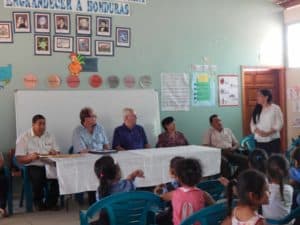 In the car, the nurse discloses that the father is twenty-five, not at all present, and initially denied he was the father.  He has done nothing to support the child or the fifteen year old mother.  After much fighting, finally he agreed to give the family about seventeen dollars a month.  StoS assisted the family through the difficult pregnancy and birth, monitored the progress of the child, and has provided the medical care and nutritional supplements.  There was no particular need for Wayne to buy or deliver the formula.  Still, this was Wayne’s secret mission.
Missions need to be developed, structures and systems designed and implemented, accords signed, clinics and schools built, education provided, complaints addressed, relationships forged, people served, and a thousand other things attended to.   In Shoulder to Shoulder’s next mission, we will do our best to partner with Honduran farmers, local governments, and other well-intentioned agencies to establish food security in the Frontera.  But a sound mission and an effective system is not enough to satisfy the hunger of the heart.